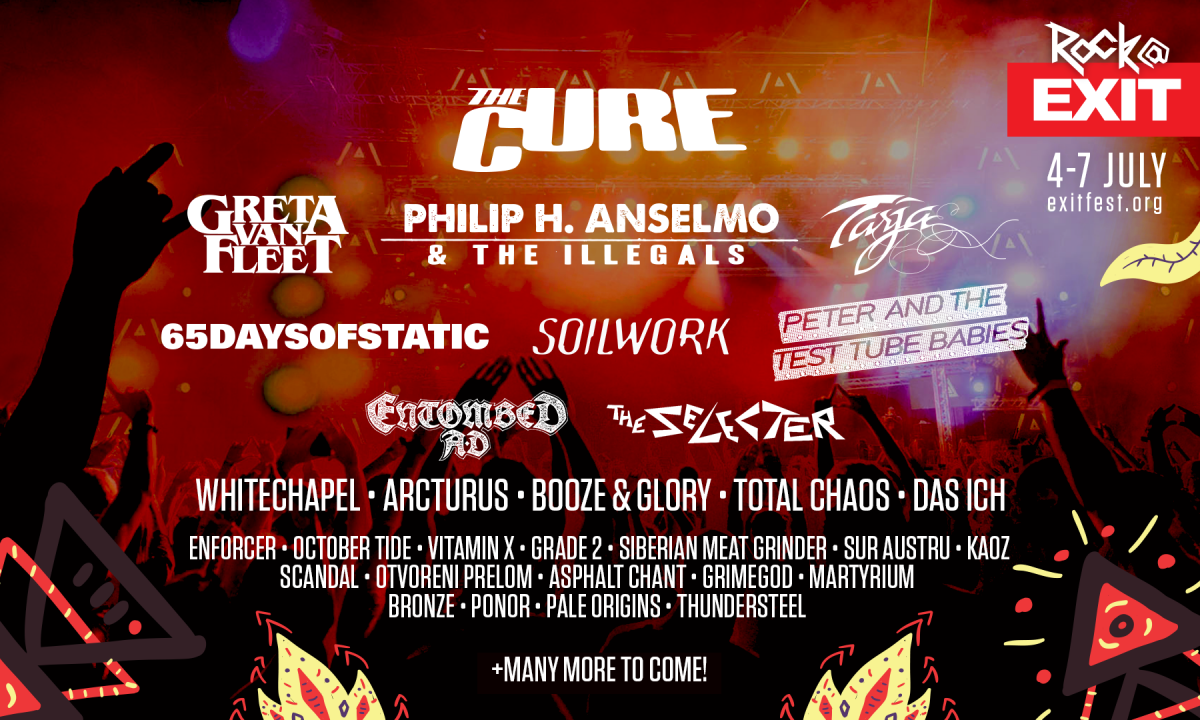 Between July 4 and 7, EXIT Festival’s home at the Petrovaradin Fortress will be rocked by heavy guitar riffs and energetic vocals headlined by rock giants The Cure! They will, among others, be joined by the most striking rock’n’roll band of today, Greta Van Fleet, the iconic Pantera frontman Phil Anselmo with his new band The Illegals, as well as the diva of symphonic metal, Tarja Turunen!

The news that a serious rock crew is gathering at Serbia’s EXIT Festival delighted all fans of heavy sound, ready to conquer the Petrovaradin fortress from July 4 to 7.  A true spectacle is being prepared for this year’s EXIT, headlined by one of the greatest bands in the history of music, The Cure, for whom this year is particularly important, as they were inducted into the Rock & Roll Hall of Fame in March. They started their tour at the Sydney Opera House, celebrating along 40 impressive years on the international scene, while EXIT made it on the tour list due to the personal insistence of the band! Greta Van Fleet or the saviors of Rock and Roll, as they are hailed by the media, are bringing old-school rock into fashion again – and they are also bringing their numerous hits from their debut album straight to EXIT Festival. The album itself achieved a massive feat – it made it to the top of the American music chart! Also arriving to the fortress is Phil Anselmo, the famous frontman of Pantera, known worldwide one of the biggest metal bands of all times. Along with him, his new band The Illegals is arriving to EXIT, with a special performance consisting solely of Pantera songs. Another former singer of a legendary band, Nightwish’s Tarja Turunen, will face the crowd of EXIT Festival with her powerful operatic voice at Addiko Fusion Stage.

The massive army of guitars at this year’s EXIT will further be reinforced by the iconic English band 65daysofstatic as a supporting act for The Cure, the giants of the Swedish melodic death scene Soilwork, famous British punkers Peter and the Test Tube Babies, Swedish metal pioneers Entombed A.D. and ska legends The Selecter. The explosion of guitars will be further led by one of the leading deathcore performers in the world Whitechapel, giants of Norwegian music scene Arcturus, fearless street punk/Oi! band from London Booze & Glory, Californian hardcore punks Total Chaos and German and worldwide legends of the dark wave industrial scene Das Ich! In charge of a mean gig will also be Enforcer, one of the most powerful heavy speed metal bands from Sweden, as well as one of the most acclaimed metal names of this unique scene, the Swedish October Tide, Dutch hardcore band Vitamin X and English punk band Grade 2, while straight out of the frozen hell of Russia we can expect the crossover band Siberian Meat Grinder. The audience will also be able to hear Romanian black metallers Sur Austru, as well as the Slovenian KAOZ, the metal aborigines from Velenje. Aside from them, Rock@EXIT at this year’s edition will be completed by Scandal, the melodic street punk band from Romania, as well as Otvoreni Prelom, the anarchic hardcore punks from Serbia, Asphalt Chant as a leading domestic dark wave band, and veterans of the Romanian gothic doom scene – Grimegod. The Petrovaradin Fortress will also be conquered by the Maltese extreme metal band MartYriuM, the hardcore Belgradians Bronze, while the region will, as a reinforcement, provide two Zagreb-based groups – hardcore band Ponor and metalcore band Pale Origins, while the local Thundersteel will be in charge of the old school heavy metal sound.

EXIT tickets are available at exitfest.org, and for those who wish to bundle them with accommodation and local transfer, there are also packages starting at €145. Default accommodation is the festival camp located on the most beautiful beach on Danube, which offers glamping options, shade and various fun content, while hotels can be booked through EXIT’s official tourist agency at exittrip.org.