Lowlands is gearing up for it’s 27th edition this month. 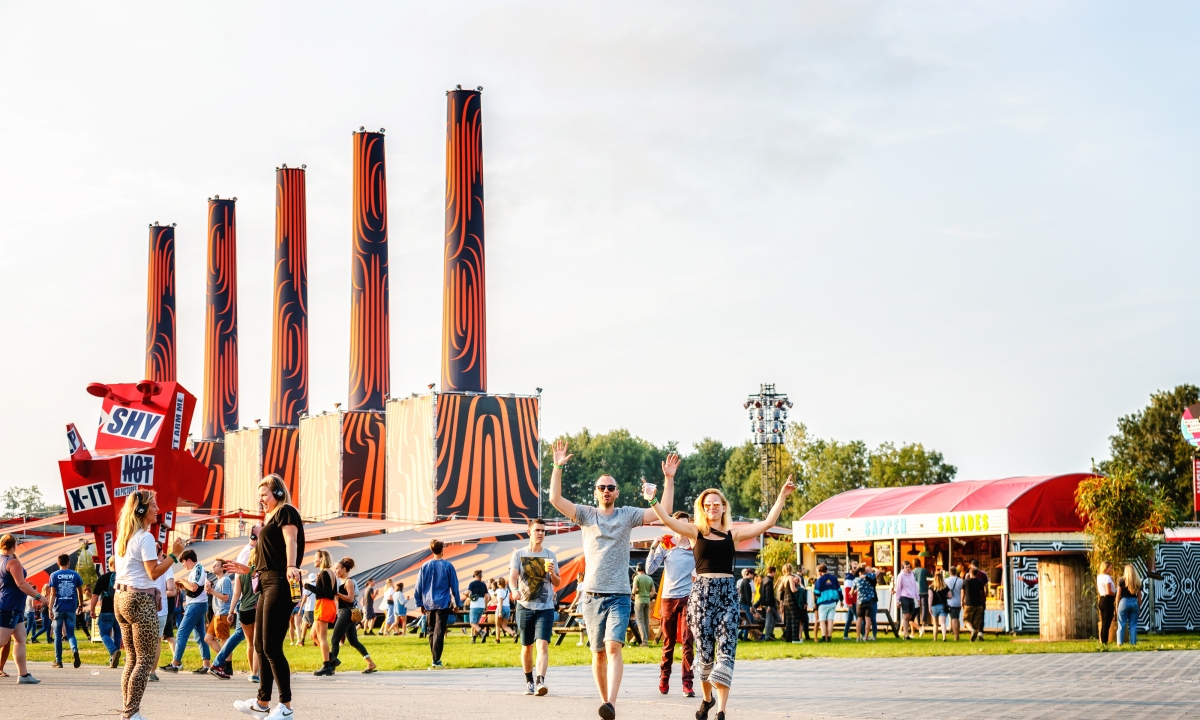 Priding itself in supplying top notch facilities for its visitors in a way British festivals can’t seem to match, Lowlands has a wellness village with saunas, hot tubs and sports facilities, dozens of restaurants from all corners of the earth, food and drink stalls, a large market with everything from clothes and vinyl stores to a barber’s shop, its own currency, a local radio station, a daily newspaper and, last but not least: seven luxury campsites with flushable toilets, hot showers and dressing tables. You really can have it all and camp in comfort and style.

Holland has no shortage of festivals packing out the summer season, but Lowlands is the country’s most iconic music event that’s been delivering lost weekends since 1993. The festival takes place in the northern rural area of Biddinghuizen, roughly an hour by train from Amsterdam’s super-connected Schiphol Airport, so it scores plenty of extra bonus points for being one of Europe’s easiest festivals to plan logistically.

A Campingflight To Lowlands Paradise — to give it its full celebratory name — is one of Europe’s premier festivals, an expressive, open and creative adventure with a wildly diverse line-up of musicians, artists, thinkers and dreamers pitching together for the biggest weekend of the year.

The festival takes place in the northern rural area of Biddinghuizen, roughly an hour by train from Amsterdam’s super-connected Schiphol Airport, so it scores plenty of extra bonus points for being one of Europe’s easiest festivals to plan logistically.

From the main arenas to pop-up stages, installations and other one-off happenings, hundreds of performers are on site to steer Lowlands campers in all manner of left-field directions over a giddy four days. This year a few big headline acts include Tame Impala, The National, Billie Eilish, New Order, A$AP Rocky and Anderson .Paak and the Free Nationals, but there’s so much more to discover below the surface.

1.They’re smooth operators
We’ve already mentioned Schiphol Airport’s convenience as a hub flying from anywhere in Europe, and the 70km to Biddinghuizen is just a short train and shuttle bus away (and the shuttle bus to nearby Lelystad runs all day for supplies).
Once you’re in, forget about previous horror stories of missing bands while standing in half-hour queues for gruesome portaloos or having your buzz drained in a bar queue that lasts as long as a DJ set. There’s virtually no queues at Lowlands for food, drink or toilets. It’s not exactly a hot take — they simply hire enough bar staff and make sure there are enough bars and toilets around.
And their ‘Munten’ token system makes things even easier – you just buy tokens from dozens of vending machines around the festival and campsites and use them at bars and food stalls so there’s no waiting for change. And you’ve probably guessed, you won’t have to queue for these vending machines either.

2.Happy campers everywhere
Campsites at all the major UK festivals have slowly been getting better over the years, but the bar was set pretty low, from horror stories of tents being set on fire, mile-long queues for meagre facilities and trash piles that would cause Wall-E to short circuit.

Even though Lowlands has 60,000 party heads roaming around, the campsites have a more boutique festival vibe, with an emphasis on ample space and well-tended facilities. There’s no drudgery involved after your wake-up – there’s an abundance of toilets, showers and food stalls, and even art installations and games areas. And very importantly, there are plenty of bins and everyone gets a recycle bag – there’s virtually no litter.

And this is only the ‘regular’ campsites. If you want next-level treatment, the Gllamcamp area has you covered, with a range of canvas tipis, yurts and bell tents, mini cabins, quirky wooden ‘motels’ and even a welcome lobby with a fire pit. And even if you’re traipsing back in the early hours after a rave you’ll have relative silence to drift off.

3.The lost weekend inclusive atmosphere
The Dutch are famed for their work ethic and unwavering ability to make things run smoothly, but they’re also European league leaders in partying, illustrated by their huge number of festivals and famous clubbing scenes in cities like Amsterdam and Rotterdam.

There’s a rule at Lowlands and that’s once you’re in, you’re in — it’s an inclusive party to let off steam for four days. You can’t buy day tickets, so when you get your wristband and walk through the gates on Thursday you’re there with everyone for the long haul until Monday morning — no giddy fresh faces gatecrashing on Sunday and taking over.

Organiser Eric van Eerdenburg says: “If you come to Campingflight you come in on Thursday and leave on Monday, there are no fresh virgin spirits coming in! On Sunday, people may be going berserk, but people are connected all over the field — it’s a dream place.”
And even if everyone’s going berserk, you won’t find any marauding belligerent drunkenness – maybe due to the Dutch liberal drug laws.

4.Higher learning
All too often music festivals are an arms race to see how many brain cells you can blitz before Monday morning, but Lowlands is one festival that might send you home smarter than when you arrived.

It’s a true music and arts festival, with sculptures, installations and performance art on display at all times. Music is also only one of the categories on the programme, which also includes comedy, theatre, dance, literature, philosophy and arthouse cinema. It’s hardly recommended, but you could theoretically go to Lowlands and have a fulfilling weekend without seeing any bands.

The non-music programme isn’t relegated to the sidelines, but the activism, debates, seminars, workshops, lectures and readings are an integral part of the whole Lowlands experience.

5.Strike a pose at the vogue performance workshop
To dive in feet first at Lowlands it’s better to recalibrate your body clock and flip to nocturnal mode, if only to catch the early hours electronic artists DJing at various corners of the site. And chances are, if you’re not Dutch you may already feel like you’re lagging behind with your dancing when you spot the locals’ famous shuffle-step ‘Konijnendans’ techno steps.

But Dutch dance pioneers House of Vineyard are at Lowlands this year to welcome you into the ballroom community and reprogram your two left feet with a vogue performance workshop. Vogueing was created by gay and transgender people in the 70s and 80s in New York black and Latino communities as a form of escapism from discrimination through flamboyant dance battles. Popularised in the mainstream by Madonna’s 1990 hit, Vogue culture has been a huge influence on artists such Beyonce, Rihanna and FKA Twigs, while scene terms like ‘throwing shade’ are part of the everyday youth culture lexicon.

Here’s a chance to engage with a vibrant, defiant, inclusive subculture, and look good while doing it.

6.A sense of history
The current incarnation of Lowlands has evolved from its beginnings in 1993, with a line-up crammed with crucial alt-rock acts such as Smashing Pumpkins, Jesus Lizard, The Breeders, Tool and Rage Against the Machine. After a break, the festival returned in 2000 and has returned every year since.

And let’s not forget that the whole magic was started in the late 60s with a Flight To Lowlands Paradise, with Dutch acts playing the first edition in 1967 and a little upcoming British act by the name of Pink Floyd headlining in 1968…

A Campingflight To Lowlands Paradise really is the ultimate summer holiday extravaganza!