Meet a new generation of Italian artists at The Great Escape. 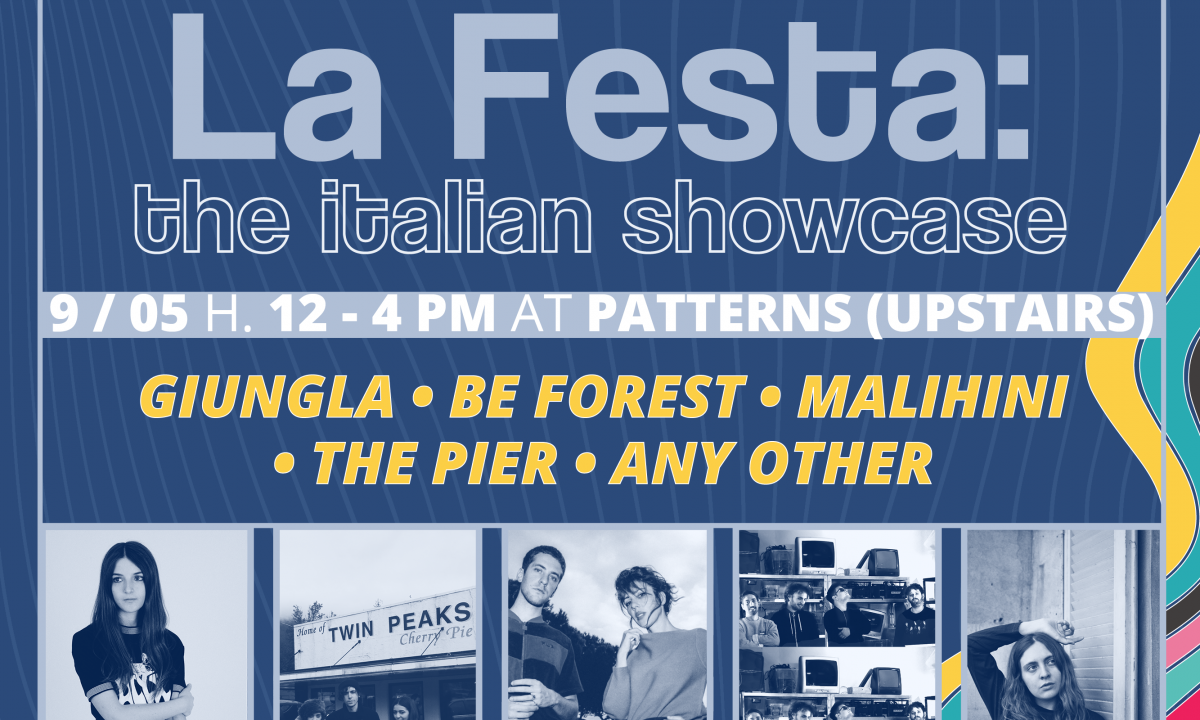 Italy has a new generation of young and talented musicians redefining what Italian music means within the international music scene. Already known for its fashion sense, cultural monuments, beautiful landscapes and art, Italy’s music scene is now gaining global recognition. Ready to make their mark on this year’s Great Escape are 5 artists covering a diverse range of genres from emotive introspective rock and shoegaze to riotous exuberant indie-pop and post-punk.  These acts should be on your radar for 2019.

Already making waves is Any Other, whose recent LP and international shows have been gathering praise from the likes of The 405, The Line of Best Fit and Eclat Magazine. Italian Rolling Stone boldly called her “Best Italian female musician” proclaiming that her brand of emotive introspective rock would ignite the Italian scene. Italian shoegazers Be Forest make music that harbours feelings of intense otherworldly remoteness reminiscent of 4AD classics described by BrooklynVegan as “…gorgeous, ethereal and moody “Bengala” that has some serious Slowdive vibes.” Giungla has already impressed tastemakers with her riotous exuberant indie-pop and shared stages with likes of The xx, Foals, Grimes and Battles with support from Lauren Laverne on 6 Music. Malihini are ones to watch having recently been signed to the Memphis Industries label and featured in Loud & Quiet, Clash and Stereogum to name a few. Finally is The Pier who are no strangers to international showcases having already played at Reeperbahn, Waves Vienna and ESNS. Back home in the south of Italy, their special brand of punk-infused math rock has catapulted them to the main festival stages and secured excited critical reception.  Be Forest and Giungla alsoboth played at SXSW in Austin, Texas last month.

La Festa – The Italian Showcase will take place on Thursday 9th May from 12:00 at Patterns Upstairs, 10 Marine Parade, Brighton. Set times below.

Other artist shows during The Great Escape;

Listen to all the acts here: https://open.spotify.com/playlist/6tsOYDFreMkNKi7G0RNhtL

Any Other
Following the release of her latest LP “Two, Geography”’, Milan-based artist Adele Nigro is ready to take her emotive leftfield project Any Other to the next level. Adele writes, sings, plays, produces and arranges all of her songs, which bear the traces of several different influences, from the American indie-folk of Phil Elvrum (The Microphones, Mount Eerie) to the guitar work of Jim O’Rourke and David Grubbs, spiritual free jazz and orchestral arrangements as well as classic songwriting by Carole King and Joni Mitchell, all filtered through a thoroughly contemporary sensibility. Any Other also played Reeperbahn 2018 and ESNS 2019.

Be Forest
Hailing from a small town on the Adriatic coast, Italian shoegazers Be Forest (Erica Terenzi, Costanza Delle Rose and Nicola Lampredi) make music that harbours feelings of intense otherworldly remoteness reminiscent of 4AD classics as well as bands like Slowdive, Pale Saints and The Chameleons. Described by Brooklyn Vegan as “gorgeous, ethereal and moody”, Be Forest’s latest LP Knocturne is taking the band across Europe and the US.  Be Forest were recently invited to perform at KEXP, watch the full performance here.

Giungla
No stranger to international showcase appearances and sharing stages with the likes of The xx, Foals, Grimes and Battles, Ema Drei (aka Giungla) has already picked up praise from tastemaker sites around the world. Bringing together atmospheric electronics with Ema’s guitar work, in turns artfully angular then brashly anthemic and with her passionate vocals – her music is riotous exuberant indie-pop as dazzling, tricky and bursting with life as the ‘Jungle’ she named herself after.

Malihini
Their name may mean ‘newcomers’ in Hawaiian, but Malihini, aka Rome-based duo Giampaolo Speziale and Federica Caiozzo, deal exclusively in the music of lived experience and time-honed emotional intelligence, their disarming musical universe never less than distinctive, yet resonating with a confessional, modern European pop sophistication of a kind elsewhere purveyed by the likes of Charlotte Gainsbourg, Jose Gonzalez and Our Broken Garden. Recent debut LP “Hopefully, Again” (Memphis Industries) was written on a retreat on the Aeolian island of Vulcano and recorded in the remote Giant Wafer studio in Powys, Wales.

The Pier
Formed by Gabriele Terlizzi, Davide Pasculli and Danilo De Candia, the power trio comes from the south of Italy. Their repertoire includes both instrumentals and songs with English vocals. Often described as ‘indie math rock’, The Pier’s more accurate description involves a furious mixture of math, post-rock and post punk, with influences that include Don Caballero, Radiohead, Foals, This Town Needs Guns and Joy Division. Their new album “Dead Reckoning” came out in December 2018 via Kallax Records.  The band is supported by regional music export office Puglia Sounds.

About Puglia Sounds
Puglia Sounds is an office created by the regional government of Puglia, Italy (Regione Puglia) in 2010 to boost Puglia’s musicians and music industry and help establish the region as a major player in the Italian and international music scene.