The Prodigy set a new record at Terraneo Festival 2013

Posted by Nikki on August 12, 2013 in: Festivals , Terraneo Festival , Uncategorized 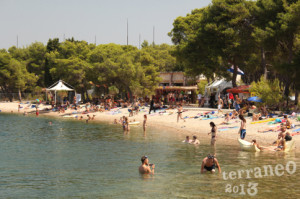 Continuing the tradition as of one of the best live bands in the world, The Prodigy have set a new record last night at the first night of Terraneo Festival in Šibenik. The band thrilled the 15,000 strong audience with a two-hour long energetic performance, after which it became clear why their rider included a bottle of oxygen. The Prodigy will certainly go down in Terraneo history as the band that performed in front of the largest crowd so far, and selling out on the opening night of the festival.  Needless to say, all performers contributed to the perfect start to the festival, including; Emiliana Torrini, The Woods, Norman Jay, Koan Sound, Kawasaki 3P and many more….

After the furious opening of the festival, the second day continued with a over 10000 people enjoying the great atmosphere and a more alternative approach to music, with performances from: Bosnian Rainbows, post-punk veterans Gang of Four, led by Andy Gill, Calexico, My Bloody Valentine, Rob Garza,  and the ever unique singer-songwriter Duncan Sheik to name but a few.

The festival finale on Friday night attracted  over 13,000 people with highly anticipated performances from Aloe Black and the lengendery Wu Tang Clan.  Other artists who kept the party atmosphere going strong included; Cloud Nothings, The Cribs, Darkwood Dub, The Bots, Blond:ish and Dubfire. The festival ended at the Red Bull Academy Stage where Eddy Ramich and Mad Mats held a great back 2 back set as the first rays of sunshine appeared and the festival was officially over having surpassed the expectations of the festival organisers.

As well as all the amazing artists by night, Terraneo made sure that all visitors had the true summer experience by setting up Terraneo Beach – the perfect place for chilling during the day swimming and enjoying the festival atmosphere! Terraneo Beach also hostsed the festivals ecology program and workshops that also attracted a large number of participants.

About Terraneo Festival:
With an eclectic program of international and Croatian artists and DJ sets, Terraneo Festival is a non-stop party zone of unforgettable summer fun on the Dalmatian Coast! Taking place from7th – 9th August 2013, in a disused military facility on the outskirts of the picturesque town of Sibenik, the 3-day music programme features over 120 music acts on 3 open-air stages and 2 DJ stages, transforming the otherwiae industrial setting into a a bustling little town with a warm and intimate atmosphere.