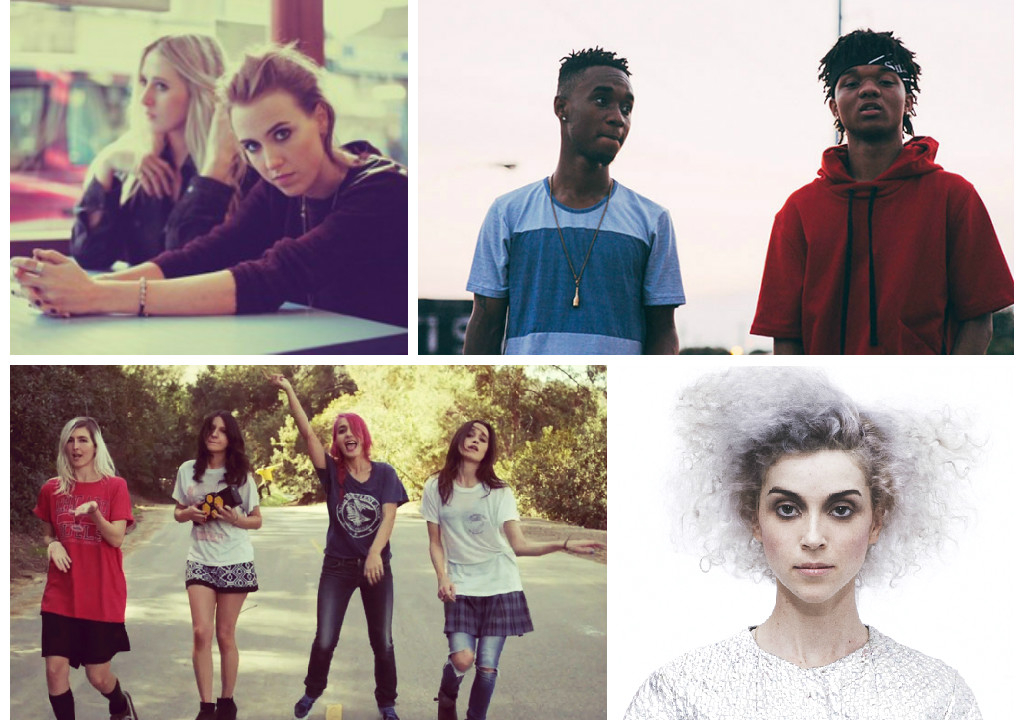 With Glastonbury in full flow, the 2015 festival season has officially begun! But with thousands of acts set to perform at events all across the world this summer, who will be the most memorable festival act and where is the best place to see them?

There’s an incredible array of choice for adventurous festivalgoers, from festival holiday experiences at EXIT and Sziget offering rock to reggae and everything in between, to forward thinking alternative music at Positivus and OFF Festival, the laid-back house and disco grooves of boutique festivals Oasis and The Garden Festival, and the energy-fuelled techno, bass and 4/4 beats on show at Balaton Sound, Mysteryland ADE and EXIT’s legendary Dance Arena.

Wherever you choose to go this festival season, get ready to witness performances from the biggest acts on the scene and the most exciting newcomers. Need some inspiration on which acts to check out? Here’s 10 must-see acts for the 2015 festival season and where to see them.

Eli & Fur
London DJ and production duo Eli & Fur have been making waves on the UK electronic scene since the release of their debut hit single You’re So High in 2013. A series of stand out recent releases, including a collaboration with Shadow Child, remixes from Jimmy Edgar, Hackman and Ejeca and their latest offering Turn The Lights Down, have been hotly tipped by the likes of Mixmag, XLR8R, Pete Tong and DJ Mag.
See Eli & Fur at Oasis Festival, Morocco, 11-13 September theoasisfest.com

Warpaint
Mystical LA four-piece Warpaint are as well known for their swirling, expansive sounds as they are for their solid bond, something that can be seen in every one of the band’s live performances. Combining ethereal vocals with vast instrumentals, their captivating show will take you on a trip to Woodstock 69.
See War Paint At Positivus, Latvia on 17th – 19th July https://www.positivusfestival.com/lv/

Rae Sremmurd
After first appearing on Mike Will Made It’s mixtapes in 2013, adolescent California rappers Swae Lee and Slim Jimmy took the rap world by storm with hit singles “No Flex Zone” and follow up “No Type”. Remixed by stars including Lil’ Kim, Nicki Minaj and Pusha T, the duo’s ambitious energy and rowdy trap tinged beats are set to see them rise to the top.
See Rae Sremmurd at Mastercard Balaton Sound, Hungary, 17-19 July http://sziget.hu/balatonsound_english/info/about

Octave One
One of the biggest and most respected underground techno acts, Octave One have remained at the forefront of the scene for over 2 decades now. With their recent return to production after a 7-year break expect to hear exclusive new material in each dynamic live performance.
See Octave One at the Amsterdam Dance Event, The Netherlands, 15-19 October http://www.amsterdam-dance-event.nl/

Ilovemakonnen
Makonnen Sheran is a whimsical self-made rapper, singer, and producer who, whilst spending 2 years under house arrest, began producing music. He gradually built a reputation for his surreal and seemingly lackadaisical approach to singing and rapping before getting picked up by Drake who remixed and inserted himself into Makonnen’s “Club Goin’ Up on a Tuesday”.
See I Love Makonnen at OFF Festival, Poland, 7–9 August http://off-festival.pl/

Bonobo
Simon Green aka Bonobo is the British genre-bending producer whose ambient productions have sought him international fame. With vast soundscapes that instantly transform a mood and venue don’t miss your chance to catch one of Britain’s finest electronic artists as he plays at the 10th and final edition of The Garden Festival in Croatia.
See Bonobo at The Garden Festival, Croatia, 1-9 July http://www.thegardenfestival.eu/

Sandrien
Former Trouw resident Sandrien has grown from local favourite into an international ambassador for the late world-famous club and the wider Dutch underground scene. One of Amsterdam’s finest, this is a DJ with a solid reputation who can transfix the crowd with her enticing techno sets.
See Sandrien at Mysteryland, The Netherlands 29-30 August http://www.mysteryland.com/

Tyler the Creator
The RZA of Odd Future, Tyler the Creator is the alternative hip-hop crew’s main rapper, producer, and source of inspiration. Recognized for his original blend of bizarre, surreal, and filthy material, Tyler and other crewmembers including Frank Ocean and Earl Sweatshirt have garnered a cult following for their progressive niche.
See Tyler the creator at Sziget festival, Hungary, 10-17 August http://szigetfestival.com/

Exit Festival, Serbia, 7 – 14 July http://www.exitfest.org/en
Starting as a student protest fighting for political change and freedom EXIT continues to spread the good vibes in the Historic fortress overlooking the river Danube with a host of different stages connected by cobbled streets, ramparts and tunnels, with something for music lovers of all genres. Acts for 2015 include Adam Beyer B2B Joseph Capriati, Clean Bandit, Faithless, Eagles of Death Metal, Hannah Wants, Leftfield, Motorhead, Octave One, Roni Size Reprazent and Tom Odell

OFF Festival, Poland, 7-9 August http://off-festival.pl/
OFF Festival is a way of life, one that flies in the face of current trends and stays true to itself. This is the place to discover the boldest and eclectic alternative acts from around the world, including Coals, Girl Band, Golden Teacher, Jacek Sienkiewicz, Kristen, Mick Harvey performs the songs of Serge Gaisbourg, Patti Smith, Run the jewels, Ride, Sun O))), The Stubbs and Young Fathers

Balaton Sound, Hungary, 9 – 12th July 2015 http://sziget.hu/balatonsound_english/info/about
Stretched along the shore of Lake Balaton in Hungary, Balaton Sound is the perfect mix of beach holiday and music festival. Seaside lounges, restaurants, bars and anything you need to enjoy the Balaton sunset, plus the biggest names in music, thats the beloved concept of Balaton sound. The event attracts approx. 100000 visitors each year and turns Zamaradi, a small town on the southern shores of Lake Balaton into a massive party arena. The festival’s venue is a picturesque beach resort beside the biggest lake of central europe, and also the touristic center of the region.

Oasis, Morocco, 11-13 September 2015 http://www.theoasisfest.com/
Oasis is set to put Marrakech on the festival map with its inaugural event this summer! Taking place at the idyllic Fellah Hotel, festivalgoers can soak up the sun and revel in the spectacular views of the nearby Atlas Mountains, whilst enjoying the ultimate soundtrack of house, techno, disco and electronica, supplied by acts including Agoria, Âme, Axel Bowman, BLOND:ISH, Cassy, Derrick Carter, DJ Harvey, DJ Tennis, Eli & Fur, Guy Gerber, Matthew Dear, Robag Wruhme and tINI.

The Amsterdam Dance Event celebrates its 20th anniversary this year, taking over the beautiful city of Amsterdam for 5 whole days and nights of electronic music. The biggest club festival in the world, ADE showcases more than 2000 international DJs, spinning everything from house and techno to bass and dubstep or trance and disco, making it the ultimate electronic music experience.