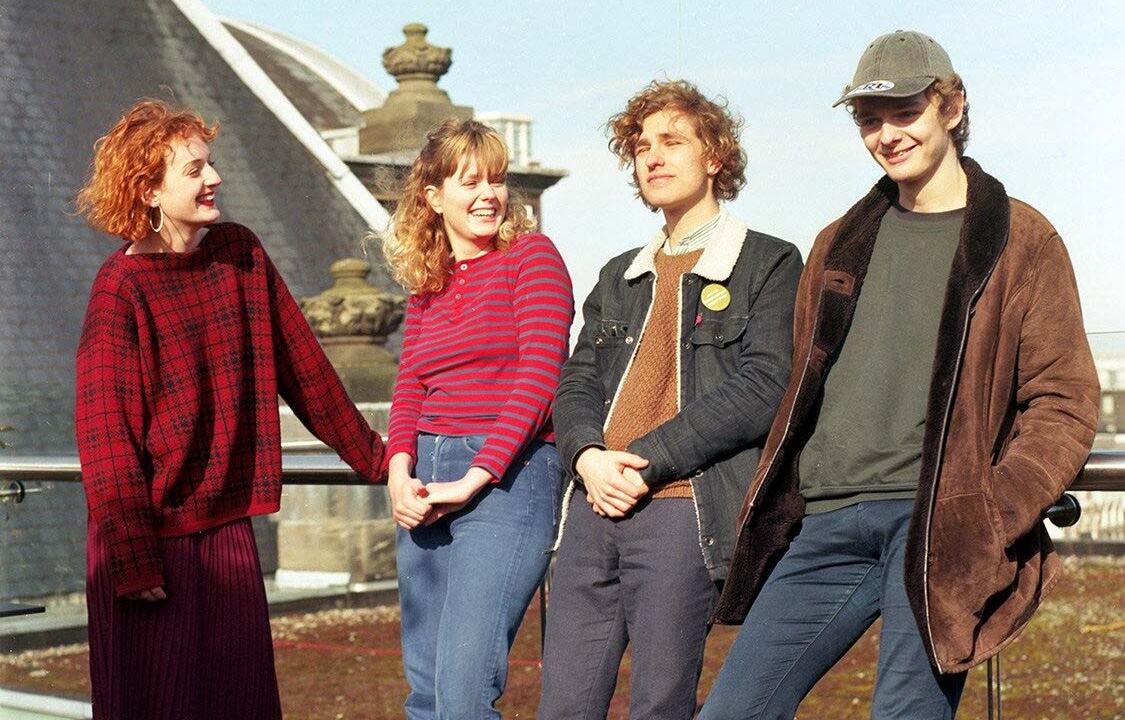 The Netherlands are this years lead international country for The Great Escape so get ready to discover the country’s most prominent rising stars in partnership with the Dutch Music Export.

Said Canshaker Pi “After having played dozens of shows in the UK over the last year, it’s a huge honor to play The Great Escape among our Dutch friends this year. We love coming back to Brighton and join the awesome Dutch wave of bands ready to take over Europe!”

Having already built solid foundations in their home country these acts represent a variety of genres from alternative noise rock and garage to indie folk, quirkpop and singer songwriters with beautiful vocal harmonies. There really is something for everyone and these acts are ones to keep on your radar in 2018.

“We played last year’s TGE and it was such a great festival that even in the pouring rain we had the best time walking through Brighton checking out cool bands like Shame and Goat Girl. We’re honoured to play this year again, especially because we’re in the company of the cream of the Dutch crop with acts like The Homesick, Canshaker Pi and so many more.” Says Pip Blom.

The Dutch Music Export is a longstanding partner at The Great Escape festival, since year one the Dutch Impact party has been a highlight in the convention programme. For thirteen years Dutch artists have provided festival go-ers with many incredible and memorable performances from artists such as, Amber Arcades, Dope D.O.D, Jacco Gardner, Jameszoo and Klangstof,

Find out more about the bands below and if you’d like an interview or guestlist to the showcase please let us know.

Brought to you by Dutch Music Export, powered by Eurosonic Noorderslag, Dutch Performing Arts and Buma Cultuur. With the kind support by the Embassy of the Kingdom of the Netherlands.

Brass Rave Unit
Brass Rave Unit delivers high octane muscle and lung powered raves at any location and at any time. They gained notoriety by playing in the Amsterdam club scene, toppling over the DJ-stand and playing with all their might to remind people that live music and real instruments are still the best ingredients for an all-out party.

Canshaker Pi
Canshaker Pi’s inflammable brand of indie rock, their relentless energy and highly-strung stage antics have earned them the title of one of the best Dutch live bands. Their debut record was produced by Pavement’s Stephen Malkmus and landed them gigs at every major festival in The Netherlands and sent them all around Europe, spreading havoc, excitement and awe. While expanding their territory by winning hearts and minds one by one the band is also working on a new record.

Charlie & the lesbians
Charlie and his lesbians clearly take no prisoners. The primitive instigations of this smouldering collective of curiosities have shaken numerous cellars and venues. The group from Eindhoven released a gruesome single and debut EP in 2017. The Lost Boy EP was released on vinyl as well and the brutal live reputation was well captured. It’s like Charlie & The Lesbians wanna play Sex Pistols, The Stooges, (Thee) Oh Sees and nihilistic post-punk all at the same time and especially very punk. The live show is all about danger.

Day Fly
London born singer and songwriter Beau Nox is an intriguing and elusive character. Having moved to India as a child, Beau spent his formative years running away to the Himalayas and exploring the streets of New Delhi by night. Beau Nox is a unique new voice in the alternative pop scene. Teamed with producer Rudy Jr., these two 20 something’s formed Day Fly, a duo described by Boiler Room as ‘’soul lovingly linking arms with alternative hip-hop with a smidgen of sing-a-long pop shaken in.’’ The duo has promised their first full length album 2018, A bittersweet concoction of ominous synths, fuzzy guitars and disarming vocals with themes exploring the vulnerability of youth, and love.

out their own route, one that has been full of wild parties, including their own festivals, and crowdsurfing kids. The foursome’s high-octane protopunk and acid-drenched psychedelics create havoc not unlike a ferocious horde of bees. They cemented their live reputation with debut album The First Stirrings Of Hideous Insect Life and now they back, bigger, bolder and rougher than ever.

Naaz
Naaz is an 19-year-old singer-songwriter and producer from Holland, who immediately captures your attention with her distinctive voice. Having a Kurdish background, it took Naaz quite some time and effort to convince her family to allow her to follow her passion. During that time, Naaz taught herself to write, produce and record her own music in her bedroom, so she could still be able to make music regardless of any circumstances. Her quirky, playful yet subtle productions go hand in hand with her melodic songwriting, resulting in a music genre which she herself has named ‘quirkpop’. Now with her family lovingly by her side, she wholeheartedly encourages other artists to do the same and never give up on their dreams. In 2017 she signed her first record deal with Universal Music, which quickly followed with her first official single ‘Words’. Her debut EP ‘Bits Of Naaz’ is expected to be released in 2018.

Nana Adjoa
Nana Adjoa, is a Dutch-Ghanaian singer, songwriter, bass and guitar player. Throughout her youth, Nana was involved in various musical projects before moving to Amsterdam to study bass guitar at the prestigious Jazz Conservatorium. While playing as a bassist for several successful Dutch acts she began working on her own material and took part in a prestigious singer-songwriter talent contest the Grote Prijs van Nederland. As runner-up, Nana’s alternative/ indie pop songs immediately drew attention. All of Nana Adjoa’s songs come from a deep place. The multi-talented Nana Adjoa is hard to capture in one genre, but her soulful yet groovy songs can be traced back to the Nineties, specifically to her love for British trip-hop. With a warm voice that encompasses itself in the tones of soul, combined with her compact and poetic lyrics, Nana manages to be melancholic without losing joy. Now in the running for ‘Dutch Talent to watch’ in 2018, Nana’s debut EP ‘Down at The Root (part 1) was released in November 2017.

Pip Blom
Based in Amsterdam, 21 year old Pip Blom writes, records and releases her own indie-pop tunes with a twist. Although she only started releasing her raw guitar power with catchy melodies early 2016, things move fast. Pip Blom is a band now and have recorded two sessions for BBC Radio 6 (Marc Riley) and one for Radio 1 (Huw Stephens). They’ve played a lot in Holland and Britain and will support the Breeders on their European tour this summer. MTV UK called the gig at The Great Escape 2017 one of the highlights of the festival.

Paceshifters
Alternative/noiserock trio from the East of The Netherlands are a band that doesn’t care about lists, bank accounts or what is supposedly hip. Paceshifters resurrect the alternative rock of the 90s and add loads of live passion. The band is like a bolt of lightning for the current musical landscape, channelling an unbridled ambition and energy, and seeing them live is believing. Last album Waiting To Derail was recorded with producer Chris ‘Frenchie’ Smith (Datsuns, Dandy Warhols) in Austin, Texas, and now Paceshifters shown their worth at many European and just about every Dutch festival.

Pitou
The music of Amsterdam-born musician Pitou is characterized by her highly distinctive voice, special compositions and the use of vocal harmonies as an instrument in themselves. She draws inspiration from sources ranging from Bulgarian choir music to Sparklehorse and Joni Mitchell. Her highly anticipated self-titled debut record was released in 2016 on Scottish/Dutch label Mink Records and was greeted with national and international critical acclaim. In 2017 Pitou has played across The Netherlands, in Brussels, Glasgow and London, and she is confirmed for The Great Escape 2018, plus a new record is in the making.

Rosemary & Garlic
You might have heard Rosemary & Garlic while listening to your favourite Spotify playlists, like The Most Beautiful Songs in the World or Your Favourite Coffee House. The popularity of the DIY indie folk band has been rapidly growing since the release of The Kingfisher EP in 2015. The Dutch duo have gained worldwide attention with their beautiful and poetic songs, each of them filled with a great sense of beauty, nature and image.

The Homesick
Dokkum, the home of, and probably the inspiration for The Homesick, whose sound plays on pop music. Not the kind with slick beats and audacious vocal effects, but rather the kind that is closer to The Beatles, that was created as an escape from reality and provides an antidote to boredom. The three lads from the North of The Netherlands make some pulsating noise pop that gets firmly stuck in the mind and on the dancefloor. Make no mistake, the teens run one of the best live bands around.