Posted by Nikki on September 11, 2020 in: Exit Festival , Festivals 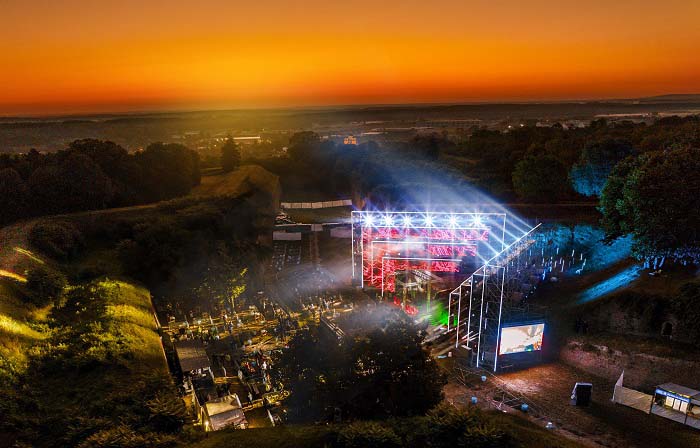 The ‘Life Steam’ project, realized in partnership with the United Nations World Food Programme (WFP), brought to Novi Sad some of the biggest artists in electronic music history such as Carl Cox, Charlotte de Witte, Nina Kraviz, Adam Beyer, Black Coffee, Hot Since 82, Paul van Dyk and many more. Artists performed either live or virtual onone of the most spectacular productions of the yearthat was specially built for this occasion on area of world renowned EXIT Dance Arena that usually receives more than 20.000 people. With this project, EXIT became one of the few music festivals in the world that managed to produce live festival performance in 2020, after being postponed twice due to the epidemic peaks in Serbia.

There were only 500 people in the audience every festival night, while all health measures were conducted, even stricter than those prescribed by the Government. Social distancing was maintained among other measures and with such a demanding task, incomparable to anything so far, EXIT showed how a completely safe event can be organized even during a pandemic.

EXIT’s ‘Life Stream’ performances will be broadcasted over the course of two long weekends, from September 17th to the 20th and September 24th to the 27th. Together with artists performances, ‘Life Stream’ will feature videos and messages about looming environmental and hunger crisis. The teaser in the form of the premiere broadcast of Charlotte de Witte’s performance was aired last Saturday and resonated in the global music industry and community with viewership of more than 600,000 people so far. The complete Life Stream program is available on the EXIT’s official website and EXIT’s Facebook page as well as on Life Stream’s website,containing a detailed broadcast schedule.

Exit’s ‘Life Stream’ also included the international panel Conscious Music, where key people of the WFP, David Beasley, and Exit, Dušan Kovačević, spoke. Beasley pointed out that due to the Covid-19 pandemic, the number of people exposed to extreme hunger has increased to as many as 270 million, which is an increase of over 80% compared to the previous year. According to Dušan Kovačević, if humanity does not change the direction it is moving in, our planet may become uninhabitable over the course of the following decades, due to the worsening climate changes. He added that with the Life Stream project EXIT wants to set a good example and encourage other festivals to use their media space to draw the public’s attention to the environmental and hunger crisis. The Life Stream concept will be developed as an open-source platform and will be offered to other festivals and events around the world, for free.

The peak of EXIT’s 20th anniversary celebration will happen at EXIT 2021 from 8th to 11th of July, with the next year also marking 60 years od the United Nations World Food Programme. EXIT 2021 will see the performances of David Guetta, Tyga, Eric Prydz, Four Tet, Boris Brejcha and many more.