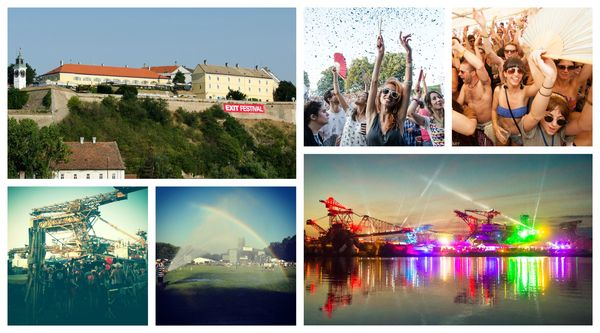 Festival season is just around the corner and what better way to get in the party mood than by snapping up a ticket to one of this year’s hottest events. From sizzling sunshine escapes to magical arctic retreats, there’s an adventure to suit everyone. For a once in a lifetime experience, soundtracked by some of the biggest names in music, make 2014 a year to remember by dancing the days and nights away at one of the following festival hotspots.

Time Warp will celebrate its 20th anniversary this year. Over the last 20 years the festival has become somewhat of an institution for techno lovers, with fans from all over the globe making an annual techno pilgrimage to witness the cream of the electronic music scene perform, surrounded by stunning lighting and visual technology. This year’s line-up includes Sven Väth, Richie Hawtin, Carl Cox, Laurent Garnier, Tale Of Us, tINI, Recondite and Seth Troxler.

Snowbombing is a festival filled with fresh air, blue skies, black runs & white-hot parties… A week-long whirlwind of world class DJs and bands, in the idyllic alpine setting of Mayrhofen, Austria. Days are spent skiing, boarding, enjoying music on mountain top stages or relaxing in the spa of a luxury hotel. Nights deliver cutting edge performances in unique venues, from a sky-high igloo, to an enchanted forest clearing. Snowbombing celebrates its 15th birthday in 2014 with a world class selection of live acts and DJs including The Prodigy, Chemical Brothers, Foxes, Tom Odell, Nina Kraviz, The Martinez Brothers, Breach, Chase & Status, Scuba and Rudimental.

Winner of the ‘Best Major Festival’ at the European Festival awards, EXIT was started by 3 students in 2000 against the Milosevic regime, fighting for political change and freedom. Taking place in the Petrovaradin Fortress in Novi Sad, Serbia. EXIT has numerous stages connected by cobbled streets, ramparts and tunnels, with something for music lovers of all genres.  Acts for 2014 include Damon Albarn, Disclosure, Rudimental, Skrillex and incredible b2b sessions including Carl Craig vs. Green Velvet.

Germany’s Melt! Festival returns to the ‘City of Iron’ in July. Located just over an hour from Berlin, Melt! Festival draws in a musically savvy crowd every year with its cutting edge line-ups. The festival site is scattered with giant industrial diggers, which come to life at night with an incredible light show. This year, expect monumental performances from the likes of Portishead, Dixon, Haim, Little Dragon, Jeff Mills, Jagwar Ma and Metronomy.

Positivus is the largest music and arts festival in the Baltic States, taking place in the picturesque coastal town of Salacgriva in Latvia. With three main stages, including the Red Bull Academy stage, Positivus brings a rich diversity of international chart toppers and underground emerging talent to the idyllic holiday location. Positivus also offers exciting art and dance stages giving festivalgoers a variety of activities and plenty to explore across the three-day festival. Taking place from the 18th to 20th of July, this year’s headliners include Bastille, Ellie Goulding, MO, Kraftwerk, The 1975 & more.

When: 2 – 4 August 2014
Where: Katowice, Poland
Who: Belle and Sebastian, Fuck Buttons, Holden (LIVE), Jacques Greene, Neutral Milk Hotel & more
Best for:  A boutique festival experience where you can discover the boldest and eclectic alternative acts from around the world.

One for the indie / alternative music lovers! This boutique festival takes place in the lush greenery of the Three Lake Valley in Katowice, Poland. OFF Festival is a way of life, one that flies in the face of current trends and stays true to itself and the organisers and the crowd have one serious finger on the pulse when it comes to music. This year the festival will serve up acts including Holden (LIVE), Belle & Sebastian, Jacques Greene, Fuck Buttons and Neutral Milk Hotel.

ISLE OF DREAMS, a major new 3 day electronic music festival that will take place in 3 different countries, inspired by the music and culture of the isle of Ibiza and featuring the top stars of Electronic Music.  Giving music lovers the chance to dance somewhere different, delving deeper into the burgeoning underground scenes of Switzerland, Turkey and Israel, ISLE OF DREAMS will feature the best local dj talent alongside the biggest international artists. Each event will take place over a three day period in August 2014 and be the major electronic music event of that country.

Proud winner of the ‘Best Major European Festival’ award in 2011, Sziget Festival is one of the biggest multicultural events of Europe, attracting almost 400,000 fans from over 70 countries to a beautiful island in the heart of Budapest. Sziget provides the ultimate festival-holiday experience with a week long non-stop party, great live acts and activities plus all the tourist attractions the city of Budapest has to offer. This year’s line-up boasts The Prodigy, Bastille, Imagine Dragons, Lily Allen, Tom Odell, London Grammar, Darkside, Bonobo, Jagwar Ma and Queens of The Stone Age.

ADE is the ONLY way to end the festival season with a bang. The city of Amsterdam is taken over for 5 whole days and nights of electronic music. Over 80 clubs involved make it the biggest club festival in the world and with more than 2000 international DJs, spinning everything from house and techno to bass and dubstep or trance and hardstyles, you’re guaranteed to see many of your favourite acts perform. Aspiring DJs can also dig deeper into the daytime program ‘ADE Playground’ where they’ll discover tech and gear workshops, artist Q&As, in-store DJ sessions and more.

For further information or to enquire about press accreditation please contact info@46.32.240.39