Posted by Nikki on December 10, 2019 in: Artists , Italian Music Export 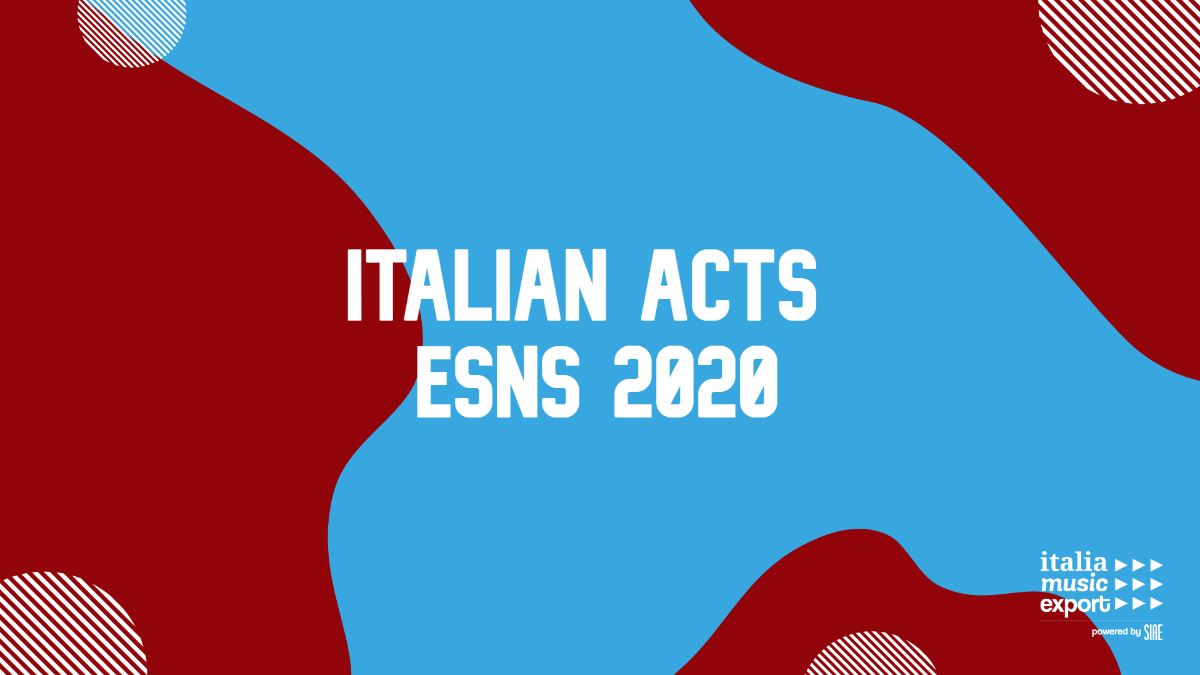 Italy continues to showcase young talented musicians shaping and redefining Italian music in the context of pan European and global music communities. Ready to make their mark on this year’s Eurosonic Noorderslag are 9 artists covering a diverse range of genres from neoclassical to shoegaze, Indie, rock, experimental electronic and tribal pop.  These acts should be on your radar for 2020.

BowLand is a trippy electronic musical project born in Florence who have already made a name for themselves on the Italian X factor 2018 and have amassed over 2 millions Spotify streams.

Young neoclassical artist Bavota explores the possibilities and boundaries of the piano sound through improvisation and use of technology.

Born in Rio, raised in Miami and currently based in Milan, Emmanuelle has released two EPs produced and distributed by Deewee (the label of Soulwax / 2manydjs) with one track included in the soundtrack of the much acclaimed Dogman film.

Bologna based producer and musician Julian Zyklus blends electronic beats with piano and synths crafting classical /ambient worlds. In 2017 he made a soundtrack for the Nat Geo musical contest Genius, receiving praise from the judges Lorne Balfe and Hans Zimmer.

Meduza have spent the year leading the charge in returning house music to daytime radio, and succeeding in their quest. Their debut release ‘Piece Of Your Heart’ has clocked up over 600 million streams globally and reached at #2 in the Official UK Charts.

Ponzio Pilates performed at Glastonbury in 2019 bringing an addictive mix of explosive twists, rhythmic litanies and danceable rituals to honour the Earth and the Cosmos.

Since the release of their self-titled debut album back in 2013, Rev Rev Rev have repeatedly been hailed as one of the finest new shoegaze bands. They received praise from BBC 6 Music, Drowned In Sound, Clash Magazine, Bandcamp Daily, NPR and played extensively across the UK and Europe.

Last but by no means least are the Milan based post punk shoegazers The Gluts who have a formidable reputation for their intense, deafening but fun-as-hell live shows.

More about The Artists…

Bowland
BowLand is a musical project born in Florence by three friends who come from Tehran. They find their roots in a space where shifting sonic textures and unusual sounds merge with ethereal voices and groovy rhythms. In 2018 they captured the attention of Italian X Factor audiences making it all the way to the finals. In December they release their new EP ‘Bubble Of Dreams’ that includes the single “Don’t Stop Me” that has clocked up more than 2 millions Spotify streams.

Genre: Trippy Electronic
If you like:  The xx, Morcheeba
Music: https://open.spotify.com/artist/6wP8Zgqr5XdEcCPn97OBFl

Bruno Bavota
Bruno Bavota is a young Italian composer and multi-instrumentalist with seemingly boundless potential and an extraordinary gift for binding together intellectual and emotional aspects of life into powerful and profound songs. Although his early works attracted comparisons to the legendary Ludovico Einaudi, Bavota has increasingly found himself pursuing ways to distort and disturb traditional arrangements and melodies in pursuit of a more distinct resonance. Armed with a plethora of outboard effects pedals and processors, Bavota creates his songs through performance improvisation that infuses a genuine sense of tension and forward momentum and makes his work extraordinarily poignant.

Emmanuelle
Born in Rio, raised in Miami and currently based in Milan, Emmanuelle is a mysterious cosmopolitan musician, half producer and half chanteuse. Hers is a songwriting with an eclectic, nostalgic and dreamy approach, in a continuous journey through hypnotic landscapes away from the monotony of everyday experiences. Produced and distributed by Deewee (the label of Soulwax / 2manydjs), her two EPs have become instant classics with cult singles like ‘Free Hi-Fi Internet’ and ‘Italove’. The latter was included in the soundtrack of Matteo Garrone’s acclaimed film Dogman presented at the Cannes Film Festival 2018.

Eugenia Post Meridiem
The story of Eugenia Post Meridiem starts in the summer 2017 when Eugenia (voice, guitar) met Matteo (bass), Giovanni (guitar, keys) and Matteo (drums, percussions). Following three months of travelling and intense music sessions in Lisbon, Eugenia returned to the project playing both solo and band sets in Genoa and in Liguria and releasing a series of tracks that showcased her remarkable vocals and songwriting potential. Mixing together indie, folk and soul influences with  distinct flavours of 60s and 70s psychedelic trends, Eugenia Post Meridiem songs lean towards rough 90’s sonic textures. Their debut album “In Her Bones” came out in October 2019 via Factory Flaws Records.

Julian Zyklus
Bologna based musician and producer Julian Zyklus started playing piano when he was a child. After learning several instruments, he studied sound engineering and electronic music and later played piano and synths with various bands and artistic projects. In 2017 he made a soundtrack for the Nat Geo musical contest Genius where he received high praise from the competition judges Lorne Balfe and Hans Zimmer. His music blends the mechanical, cyclical nature of electronic beats with more organic classical and ambient textures. Pianos, loops, synthesizers and samplings come together in his melancholic soundscapes. His debut album “Four Dimensional Waves” was released in June 2019 by the Seattle electronic label Hush Hush Records.

Meduza
Meduza have spent the past year leading the charge in returning house music to daytime radio, and succeeding in their quest. Their debut release, ‘Piece Of Your Heart’ has now seen 600 million streams globally. A million sales in the UK alone placed the single at #2 in the Official UK Charts. This show of popularity has given the Milan natives multi Diamond, Platinum and Gold certifications around the world. The follow-up track ‘Lose Control’ has already made an unprecedented impact, reaching the UK Top40 in its first week and notching upward of 50 million streams with 25 million YouTube views in just a month. These successes are also bolstered by an impressive catalogue of remixes for the likes of MK, R+, Friendly Fires and Ritual that display not only Meduza’s signature sound and energy but also their raw ability to create stand out releases in a variety of musical contexts.

Genre: Dance
If you like:  Diplo, Black Coffee
Music: https://open.spotify.com/artist/0xRXCcSX89eobfrshSVdyu

Ponzio Pilates
Ponzio Pilates started life as a music collective jamming and gigging at the old fish market in  Rimini. Their debut EP “Abiduga” came out of the collaboration with an artist Gola Hundun and was released in June 2016. In 2017 they embarked on the Pizza e Vongole Tour that extended into more than 50 shows in Italy and abroad. The band’s progressive stylistic presentation turned every concert into an addictive mix of explosive twists, rhythmic litanies and danceable rituals to honor the Earth and the Cosmos. In the autumn and winter of the following year Ponzio Pilates took spiritual refuge in isolation of the Romagna countryside and emerged with their first LP “Sukate” released in spring 2018.

Rev Rev Rev
Since the release of their self-titled debut album back in 2013, Rev Rev Rev – based in Modena, Italy – have repeatedly been hailed as one of the finest new shoegaze bands. They’ve received praise from BBC 6 Music, Drowned In Sound, Clash Magazine and Bandcamp Daily and taken their infamous live shows across the UK and Europe; sharing the stage with the likes of The Jesus and Mary Chain, the Brian Jonestown Massacre, The Telescopes and Ringo Deathstarr along the way. The band were invited at SXSW 2019, where their live set impressed Bob Boilen of All Songs Considered and earned them a feature on NPR’s SXSW wrap-up as well as airplay on the network’s radio stations.  Produced by James Aparicio (Spiritualized, Dead Vibrations), the new album marks their signing to the London cult indie label Fuzz Club Records.

Genre:  Shoegaze
If you like: The Horrors, My Bloody Valentine
Music: https://open.spotify.com/artist/0osv6JQzCfTjwPAOKZlSBP

The GlutsThe Gluts are a powerful overload psychedelic noise punk. Play to believe and play it loud.  The Milan based post punks are undoubtedly one of the loudest and most extreme bands in Italy. Over the past few years they have been playing packed out shows across the UK and Europe, building a formidable reputation for their intense, deafening but fun-as-hell live shows. The new album released on London’s Fuzz Club Records is a seven-track noise rock masterclass that can be  challenging but always rewarding. It is a sound of a band heading for the top spot.

Genre:  Rock/Post Punk
If you like:  A Place To Bury Strangers, The KVB
Music:https://open.spotify.com/artist/13WOru4Cg1ZdszgnB1AU17