OFF Festival Katowice 2019 A Venue for Music and Ideas 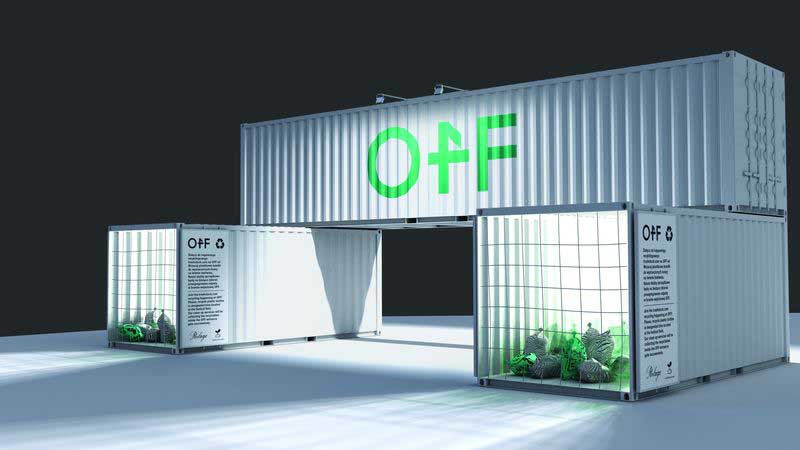 OFF Festivals regulars will know that the festival organisers care about the environment as much as they do about music, and they encourage others to do the same. Their efforts in past years won an international Green’n’Clean award and a nomination for the European Green Operations Award. This year, they are taking things one step further: The festival entrance will be turned into a recycling centre. Also, vegan and vegetarian options will dominate the food court menus, and the festival will be easily accessible by bike.

You’ll notice something right off the bat: As soon as you enter the OFF Festival, you’ll be drawn into a discussion about important issues. Instead of sweeping problems under the rug, we’re going to demonstrate their actual scale. This year, we’re turning the festival entrance into a stockpile of plastic waste.

The creators of the gate—and the website Trashstock.com—are Kasia and Wojtek, the brother-and-sister duo behind the thriving international design firm SOKKA, and winners of several European prizes in the field of design. OFF have worked with them for several years, because they share their environmental concerns and their way of thinking about the world around us.

Kasia and Wojtek still live in their hometown, Gliwice, but they’ve always wanted to help people and do useful things. That’s why they started creating high-tech design solutions for a range of industrial sectors all over the world and here in Poland. They’ve worked on dozens of innovative projects, including heart-surgery robots, race cars, construction equipment, firetrucks, snow groomers, Formula 1 helmets, and even a tank for the Polish military.

Their experience in the field of design sparked some difficult soul-searching about the environmental impact of industry and design. Realizing that every object they design will eventually become waste, they decided to make a radical change in their modus operandi. “What we want to leave behind isn’t more new stuff or more awards: it’s a clean planet,” they said. Instead of designing yet another object, they set out to apply their knowledge of design, production processes, and product life cycles in their efforts to improve the environment.

Let’s look at an example. In 2018 Kasia and Wojtek Sokołowski began winding down their design work at SOKKA to spend more time on a new startup, Trashstock.com, which aims to build a global sustainable community. Trashstock is intended to be a tool that gives people the knowledge and means they need to clean up the environment.

They shared their idea with Artur Rojek, and immediately found a partner in the OFF Festival, which was soon joined by the city of Katowice and the event’s main sponsor, the mineral water brand Cisowianka Perlage, which pledged to take full responsibility for its product and see its packaging through to the recycling stage.

This is just one example of how two people can effect real change for the good of us all.

The OFF Festival is following through with some bold changes, including a total revolution at the Food Court. Even the most meat-forward vendors have decided to shake up their menus this year, with vegan and vegetarian fare making up a whopping 80% of the food options. The OFF Festival is the only place where you can try hemp soup made from a medieval recipe. Vendors will serve only the highest quality meat, marked with two certificates: QAFP (Quality Assurance for Food Products, for poultry and pork), and QMP (Quality Meat Program, for beef). Both systems set highly restrictive standards for animal feed (which must be free of GMOs, antibiotics, fish meal, etc), genetics (certain hybrids are banned), breeding, slaughter, shipping, and processing (no MSG).

Waste management has been an important concern at the OFF Festival for several years. They use recycled materials and reusable cups, our food and beverages are served in biodegradable containers, and cleaning crews work non-stop throughout the event. They appreciate festival goers helping by depositing their waste in the marked containers.

Off also encourage festival goers to leave their cars at home, if possible, and travel to the OFF by public transportation or bicycle. Bike parking will be available next to the front gate.

The OFF Festival team are still learning and improving, but they believe that working together is the only way to change the planet.

The 2019 OFF Festival Katowice takes place August 2–4 at Three Pond Valley, its regular venue. Three-day passes are now available at the OFF Shop for 400 PLN. Campground tickets are also available for 80 PLN.