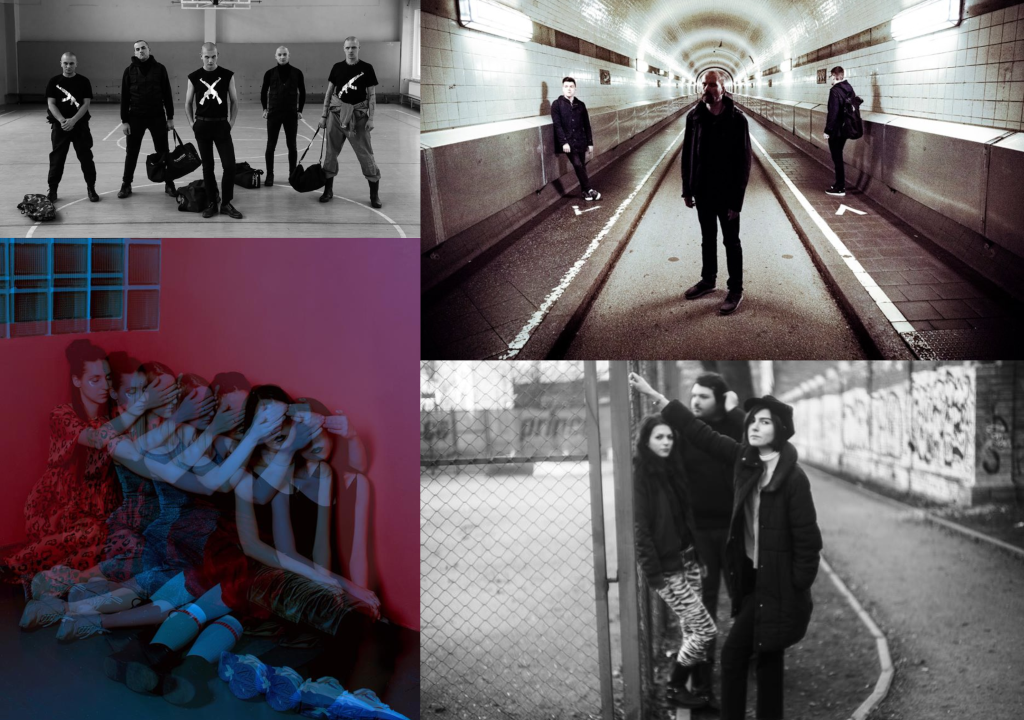 After it’s successful first edition at last years Great Escape, the RUSH initiative is back presenting another 4 exciting artists representing the best of the contemporary Russian music scene.

Already making waves on the international music scene are Shortparis, an art-punk band from St Petersburg mixing mysterious rituals and dance like drive receiving praise from the likes of The Quietus, Gigwise and Louder than War.  Also hailing from St Petersburg Chkbns perform romantic and somewhat utopian dream pop and have already featured on MTV and performed live for KEXP radio.  Fogh Depot are an experimental trio from Moscow performing cinematic music encompassing modern classical and nu jazz with Esquire stating that the band are “Musicians searching for the link between the trends of the new era and the traditions of jazz and classical music.’  Another Moscow based band is garage rock quartet Lucidvox, who interpret the songs and myths of ancient Slavs and have received media support from Clash, The Quietus and Louder than War.

RUSH is a unique initiative that has brought together key domestic music experts to select the most promising Russian performers, present them to international music professionals and integrate them into the global music community. In 2017, the first 6 acts were selected to promote internationally to showcase the diverse and talented artists the Russian music market has to offer.  Acts upported by RUSH in the past include Kiril Richter, Kate NV and Sado Opera.

Other shows where you can see the Russian artist playing during The Great Escape:

Trio from St. Petersburg, performing romantic and somewhat utopian dream pop. Growing up in Russia’s southern city of Stavropol, sisters Aneliya and Emily listened to bootleg Nirvana and dreamt of faraway Seattle. Recently, this dream became reality in a way they could have never imagined: the band Chkbns – for which Aneliya writes the lyrics, sings and plays guitar; where Emily is the drummer; and their friend Slava practices a kind of witchcraft on synthesizers – has not only visited the so-called Rain City, but also recorded their new album there as well as being broadcast live at the cult indie radio station KEXP. Prior to this, the trio – which was formed in St. Petersburg in 2012 – performed in Sweden, England, Canada, South Korea, Hong Kong, China and Vietnam. Harmonically combining haunting female vocals, romantic synthesizer, resonant guitar and explosive drums, the music of Chkbns is wholly accessible and requires no translation, no matter where it is performed. Their songs speak the universal language of indomitable idealism and utopian love

Instrumental trio from Moscow, performing cinematic music. Fogh Depot is a unique band rising in fast ascent over the Russian musical landscape. Combining the elements of dark jazz, neoclassical minimalism and intelligent electronica, the trio Fogh Depot was established in 2014. The band, which performs intriguing instrumental music on classical instruments – e.g. saxophone and piano – combined with technological innovations, mixes eloquently traced melodies and unusual sound textures, energetic beat and intricate, unpredictable polyrhythmic improvisations, and austere composition. Each and every performance by Fogh Depot is akin to experiencing something like a filmic thriller, the smooth tempo and melancholic mood of which creates explicit tension and accentuates the obligatory climax. The Moscow-based trio has released two albums on the German label Denovali: their debut S/T was followed by Turmalinturm, released at the end of 2017. Tourmaline – a gemstone found in a wide variety of colours in nature, which also changes colour depending on the angle of the light – is an excellent metaphor to describe the multilayered and shapeshifting music of Fogh Depot, which reveals itself in new light with each play

Moscow-based quartet that interprets the songs and myths of ancient Slavs. Moscow-based rock band Lucidvox is made up of four delicate girls – Alina (vocals), Galla (guitar), Nadya (drums) and Anya (bass) – although their music is anything but fragile and girly, and gestures at nothing that could be associated with typical gender stereotypes. Inspired by traditional Russian singing and contemporary garage bands such as Goat and Flamingods, Lucidvox puts out a powerful and assertive psychedelic rock, based on folk melodies and the imagery of Slavic myths. Following their performance at Tallinn Music Week 2017, the quartet caught the eye of the English-language media. ‘Lucidvox are a revelation’, the well-known British journalist and leader of punk band The Membrances, John Robb enthused in the authoritative music blog Louder Than War. And Robb is not alone in being highly impressed by how this band of musicians from Moscow are stretching the boundaries of Anglo-American alt rock.  In 2018, Lucidvox performed at the biggest festival of their professional career, the Slovak open air Pohoda Festival – with headliners that included The Chemical Brothers, Ride, and St. Vincent. There is little doubt that this is only the start of what is set to be a magnificent musical career.

Art punk band from St. Petersburg, mixing mysterious rituals and dance-like drive. After getting together in 2012, Shortparis quickly became the most outstanding representative of the Russian underground scene, performing at known high-capacity concert venues as well as at weird and wonderful places like abandoned factories and even supermarkets. The band, which has already recorded two albums, has also performed at flagship Eastern European showcase festivals such as Tallinn Music Week and MENT. These appearances attracted heaps of exuberant reviews and write-ups. The highly performative concerts of Shortparis are known for squeezing the emotion and energy out of audiences. They are hard to analyse – you have to see Shorparis live and actually be there to experience the shamanistic ritual-like mystical adventure he takes you on. Witnessing the audaciously energetic delivery of vocalist Nikolai Komyagin and his colleagues, you can’t help but admire the creativity of this electronic noir-art-punk quintet from St. Petersburg, recalling their sources of inspiration – Ian Curtis, Sexy Sue, Peter Murphy, Nick Cave, Blixa Bargeld, and Jamie Stewart from Xiu Xiu. These musical heroes, whose work erased the boundaries between rock music and fate, noticeably find their place on the altar–screen of Shortparis. Although Shortparis performs songs in English and French as well as in Russian, the band’s origins are apparent right away, demonstrating affiliation with the culture of the Russian people – a people whose inexplicable strangeness is best attributed to the “mysterious Russian soul”.

About RUSH
RUSH is a unique initiative that has brought together key Russian music experts to select the most promising Russian performers, present them to international music professionals and integrate them into the global music community.

Forged at the heart of the Russian independent music scene, RUSH initiative is a non-profit organization that finances its work through crowdfunding as well as working with sponsors, art patrons, and cultural foundations.

RUSH is open to cooperation with experienced international music industry professionals with an interest in promoting and developing emerging talent from Russia.