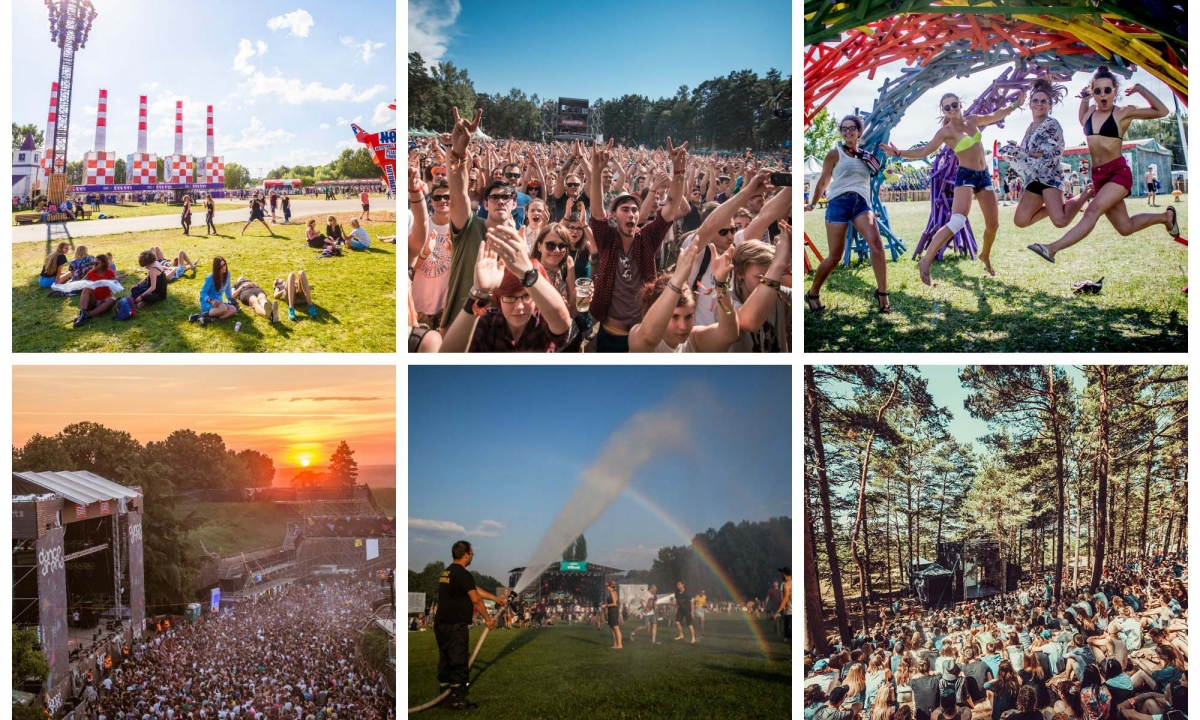 This #festivalfriday is all about #GlastonburyAlternatives. If you weren’t lucky enough to bag a ticket for this year’s Glastonbury festival don’t despair as there are a wealth of top notch alternatives on the European festival scene. Swap British weather and muddy fields for sunny beach festival or combine your festival holiday with a city break to one of Europe’s cultural hotspots. Here are 5 of the best Glastonbury alternatives for the ultimate festival getaway!

EXIT Festival | Serbia
Just a short ride away from the Serbian capital Belgrade, the magical Petrovaradin Fortress set high on the banks of the river Danube in Novi Sad provides the perfect setting for the EXIT Festival.  Started as a student protest in 2000 fighting for political change and freedom, EXIT continues to spread positive vibes, promoting change and positive education, supporting many community and humanitarian missions, while throwing a damn good party. The award winning festival has something for music lovers of all genres with a diverse mix of artists performing on numerous stages connected by cobbled streets, ramparts and tunnels.  Also renowned for it’s amazing atmosphere and energy the Dance Arena champions the who’s who in the electronic music world  set in the awe inspiring moat of the fortress, it’s that special moment when the sun’s rays shine over the fortress walls and your favourite tune is belting through the soundsystem and into your soul! EXIT continues to deliver the most adventurous and value for money festival experiences in Europe so keep your eyes peeled for the first acts to be announced soon. EXIT. Where hedonism meets activism.

Positivus | Latvia
Taking place in the picturesque coastal town of Salacgriva in Latvia,Positivus is the largest music and arts festival in the Baltic States, transporting chart-topping headliners, underground emerging talent and exciting art and dance stages to their unspoiled atmospheric coastal setting amid stunning woodland. Festival goers can dip their toes in the baltic sea or take in the atmosphere in a hammock beneath the trees while enjoying a rich diversity of international chart toppers and underground emerging talent in this idyllic holiday location. Positivus also offers art and dance stages giving festival goers a variety of activities and stalls selling locally made designer clothing and accessories, giving festival goers plenty to see and do during the 3 day event. Positivus was also recognised in the 2013, 2015 and 2016 European Festival Awards being a finalist in the ‘Best Medium Sized Festival’ category and also for ‘Best Festival Line Up’ in 2013.

Recently listed by Skyscanner as the number 1 cheapest holiday destination for 2017 this country is well worth checking out.  Montenegro has towering mountains perfect for hiking and mountain biking as well as some of the world’s best unspoiled beaches on the Adriatic Sea.  And if that wasn’t enough Montenegro featured in the James Bond Film Casino Royale and if it’s good enough for Bond, it’s good enough for us! Award winning Sea Dance festival gathers each year fans from over 50 countries from all over the world, and impressive line up of more than 100 hottest international music stars. This year, fourth edition of the festival, will be held in Budva  from 13th to 15th July, in Budva, Montenegro with acts including John Newman and Sean Paul. Voted best European medium-sized festival, Sea Dance has proven much within just three short years. Stunning location, world renowned artists and outstanding productions make this festival a must see. Save the date and experience Sea Dance festival on Europe’s hottest summer destination, city of Budva, Montenegro.

OFF Festival | Poland
OFF is a festival for the discerning music fan and the place to discover the best alternative acts from around the world.  A truly unique boutique music festival, OFF Festival takes place in ‘Three Lake Valley’, Katowice  – a beautiful green oasis in the heart of industrial Silesia.  OFF is a way of life, one that flies in the face of current trends and stays true to itself, and the ethos of organiser Artur Rojek is firmly aimed at supporting art and music with the festival bringing many acts to Poland for the first time. OFF Festival’s reputation is growing year on year driven by the festivals forward–thinking, eclectic music policy and  it’s bold and eclectic lineups.  From the greatest alternative music stars from around the world to the increasingly strong Polish scene, OFF festival has inspiring music in abundance and the organisers and crowd have one serious finger on the pulse when it comes to music.

OFF Festival takes place from 4-6 August 2017. 3-day tickets from £52 available at off-festival.pl

Sziget Festival | Hungary
Proud winner of the ‘Best Major European Festival’ award in 2015 and 2011, and ‘Best Festival Line Up’ in 2016, Sziget Festival is one of the biggest multicultural events of Europe. Taking place on the picturesque Óbuda Island in Budapest, Sziget welcomes over 490,000 visitors from over 100 countries to express themselves on their self-proclaimed Island of Freedom.  Sziget is not just about music, with more than 50 program venues offering festival goers the chance to experience many different things including; circus, theatre and dance, art and installations, yoga and sports and a huge variety of food. There is also has a beach area where fans can truly enjoy the summer and the Danube. With so much on offer in the heart of Budapest, Sziget provides a complete festival-holiday experience with a week-long party, great live concerts and all the attractions the city has to offer such as beautiful historic buildings, thermal spas and special ’ruin pubs’.

Lowlands | The Netherlands
Only an hours drive from Amsterdam A Campingflight To Lowlands Paradise is exactly what it promises to be: a true backpacker’s Garden Of Eden and Holland’s most adventurous cultural outdoor event, offering a cutting edge choice of only the best in alternative music, film, stand-up comedy, visual arts, literature and street theatre. For three days in August, a township with 55,000 inhabitants arises in the middle of the country. The Lowlands festival features heavyweight headliners, impressive installations including the renowned red and white chimney stacks and no less than twelve stages (among which a cinema and theatre), going by the names of Alpha, Bravo, Heineken, Lima, Juliet, X-Ray, Echo.  All stages are covered too, so you can enjoy all the music  and entertainment come rain or shine.

THE NIGHT LEAGUE PRESENTS IN THE DARK AT HÏ IBIZA