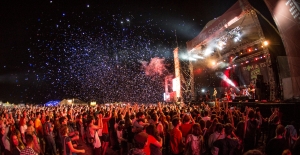 The curtain has fallen over the 7th edition of B’ESTFEST Summer Camp 2013 which has broken all records.

The curtain has fallen over the 7th edition of B’ESTFEST Summer Camp 2013.  After an amazing weekend that gathered over 60.000 during the 3 day event, establishing a new record of audience figures at the ‘summer camp’! The second day of the festival, headlined by Grammy nominee Nas, was actually the busiest day in the history of B’ESTFEST!

During last weekend, 5th-7th of July, the green field of B’ESTFEST Park was the place to be for tens of thousands of fans who wanted to party up with friends, see some great live performances, enjoy the cold beer & good food! With a line-up built up as an exciting journey through a wide range of musical genres, and a festival set-up looking like a fun village next to a willowy lake, with numerous side attractions, B’ESTFEST kept everybody busy partying for three days and three nights!

B’ESTFEST Summer Camp included 2 large stages and one major arena, plus  3 other smaller stages & tents, with the main stage featuring international names such as Nas (US), Texas (UK), Chase & Status live (UK), The Heavy (UK), Enter Shikari (UK) and Nneka (NG/DE), alongside Biohazard (US), Tiamat (SE) and Soilwork (SE) on the second stage and the bass music dutch kings Noisia, together with UK’s finest Friction and Joker in the dance arena. Also, not to be missed proved to be the reggae & dancehall rhythms of the Blazing Vibez stage or the chill-out, house & IDM beats of the Groove On Stage, the Silent Discotheque arena and the unplugged tent.

The general feedback from those who attended this year’s edition was that B’ESTFEST Summer Camp is much more than a music festival, it’s a complete experience, a “planet” of music, fine arts, recreational activities, joyous fun and endless partying. Aside from the 7 stages, the festival area included pubs & terraces, a Silent Cinema Tent, a Sports Area, a Fun-fair with bumping cars, carousel and cotton candy, an extreme sports area for the bikers and the adrenaline lovers, with a bungee jumping as the main attraction, a Lounge area with hammocks & a book corner, an Arts&Crafts tent with unconventional art expositions and workshops, and a Bazaar dedicated to local fashion designers, handmade jewellry and accessories manufacturers.

The festival also continued this year its environmental friendly initiative, the ‘B’ESTFEST goes green’ project, setting up headquarters in the Green Village, a 100% self-sustained area within the festival site, which hosted various NGO’s, workshops and art expos (art made of waste), where everyone interested was able to get information and tips for a “greener” festival behavior.

ABOUT BESTFEST:
Launched in 2007, B’ESTFEST is Romania’s leading festival brand. After winning a place in the finals of the UK’s event industry Oscars the UK Festival Awards 2009 (for Best Overseas Festival), B’ESTFEST also received a nomination for the Best Medium Size Festival category at the European Festival Awards, followed again by nominations in the 2011 and 2012 UK and European Festival Awards. B’ESTFEST has become a representative cultural brand for Romania, presenting more than 200 outstanding acts from all over the world to an audience of over 175.000 people, and becoming the only Romanian music festival included in the Top 20 European Festivals published in The Times, 2009 and Guardian, 2011. B’ESTFEST is also proud member of Yourope, an association of the most important European festivals which helps promote new European artists at top international festivals and a part of ETEP (European Talent Exchange Program). www.bestfest.ro