OFF Festival Katowice 2019 From Tęskno to Techno 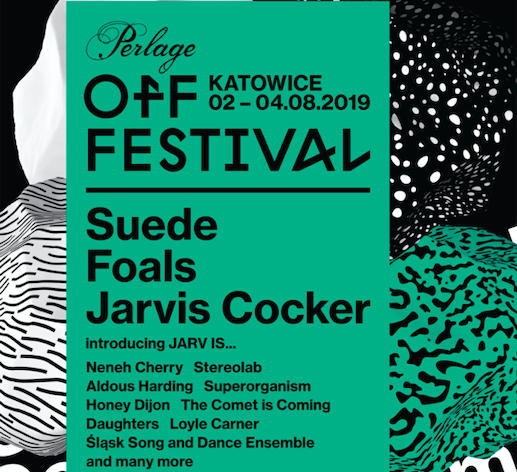 Start out with a set of acoustic dreamscapes and top it off with
an industrial techno whipping: jarring contrasts are the building blocks of our festival. Today we add seven new artists to the OFF Festival lineup.

Tęskno
Rare is the band whose name complements its music as perfectly
as Tęskno, which is Polish for “wistfully.” They could also have settled
for “blissfully” or “warmly.” Or perhaps even “magically.” Vocalist Joanna Longić and pianist Hania Raniszewska harness their exceptional musicality and sensitivity to forge an entirely original musical atmosphere that defies genres and is incomparable to any other act on the Polish
and international scene. Tęskno’s debut album Mi is rightfully considered one of the most important Polish releases of 2018.

Veronica Vasicka
A DJ, producer, the founder of Minimal Wave Records and Cititrax,
and a music activist who reintroduced the world to the obscure pioneers of 80s electronic sounds. She can often be seen performing in New York, her hometown, and heard on the air of the East Village Radio, which she co-founded. She’s been around the world with her DJ sets, which combine post-industrial electronics and underground techno.

Juan Wauters
The new wave of Latin music is officially upon us, and if you thought Rosalía taught you everything you needed to know about the culture, this concert will change your mind. More than just a showcase of songs, this set is a close encounter with a fascinating personality. Born in Uruguay and raised in New York, Juan is a singer-songwriter of the everyday experience. He started out with The Beets, smoothly blending garage rock with a folk sensibility. His solo work tilts toward the latter. This year’s La Onda de Juan Pablo—a musical journal of the artist’s journey through Latin America—is the first album on which Wauters performs entirely
in Spanish. These are songs about a humdrum life—and that’s the essence of their beauty.

Dr. Rubinstein
Marina Rubinstein was born in Russia but grew up in Tel Aviv, where she immersed herself in the local club culture, it only truly spread her wings after moving to Berlin. Performing as Dr. Rubinstein, Marina provides
a steady supply of acid techno to venues like Berghain and ://about blank.

VTSS
A familiar name to regulars of Warsaw’s Jasna 1 and Brutaż events, Martyna Maja is taking her raw, high-octane techno to new heights, conquering Berlin, recording for Intrepid Skin and Haven, and teaming up with New York’s Discowoman collective. What is it that’s propelling Martyna’s career to dizzying heights? Come and find out—and feel it with every cell in your body.

Tuzza
Benito and Ricci are coming to us all the way from… Warsaw. Tuzza
is more than just an excellent new-school hip-hop duo: they’ve got
an original concept and carry it out with impressive consistency. The artists behind Fino Alla Fine pilfer clichés from American mob movies and assemble them into original, brilliant and sarcastic depictions of life in contemporary Poland.

The Real Gone Tones
Here’s something that’s been missing from the OFF Festival: authentic, full-blooded rockabilly. We’re catching up this year with The Real Gone Tones, the shining star in the catalog of Barcelona’s El Toro Records. This Warsaw-based ensemble’s sound also features blues and country, and delivers it all with feeling and style, driven by the vocal duo of Marla Marvel and Simon Paco Núñez.

The 2019 OFF Festival Katowice will take place August 2–4 at Three Pond Valley, its regular venue. Three-day passes are now available
at the OFF Shop for 360 PLN. This price lasts until June 9 or until
the second round of tickets is sold out! Campground tickets are also available for 80 PLN.