The third edition Berlin Music Week 2012 draws to a close 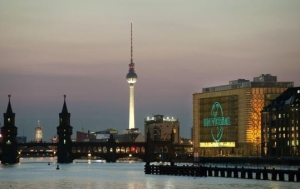 The third edition of Berlin Music Week took place from 5 – 9 September, revealing a brand new business platform ‘Word On Sound’, and attracting thousands of visitors to the 5-day city-powered constellation of music showcases, concerts and parties.

2,000 delegates at ‘Word on Sound’, 20,000 visitors taking part in the Berlin Music Week Club Program, more than 20,000 people at the Berlin Festival, 18,000 guests attending the Berlin Music Week Club Night – the third edition of Berlin Music Week celebrated its triumphant conclusion in the Admiralspalast on Sunday night, where the band Tonbandgerät was presented with the New Music Award, and at the Auf den Dächer (On the Rooftops) Festival, where Two Door Cinema Club, Mia., Max Herre, Cro and many others joined forces for the finale. With Berlin Music Week, the capital hosts a platform for the music industry that bundles activities, commitment, diversity, passion and synergies together. This wide-ranging and cooperative event reinforces Berlin’s reputation as an international music hotspot.

The week started with a new professional exchange and development forum, ‘Word on Sound’, designed for industry actors and curious and creative minds. From 5 -7 September 2012 industry actors and partners found a home away from home in the new Festival Centre at the riverside Osthafen location. ‘Word on Sound’ involved established industry institutions such as the Berlin Music Commission, all2gethernow, the Green Music Initiative and the Clubcommission as well as many up-and-coming enterprises like Network Awesome, noisy Musicworld, tape.tv, aupeo!, Spotify and CTM Festival. Crowdfunding, the new landscape for music videos, digital business models, and Do-it-Yourself and Do-it-Together activities were just some of the topics discussed. This industry get-together, attended by 2,000 participants from over 20 countries and more than 300 accredited journalists proved to be highly dynamic and provided a welcome perspective, as well as resources and networks, making ‘Word On Sound’ a very forward-looking success.

BERLINER CLUB NIGHTS ARE LONG – WITH THE NEW CLUB TICKET

Friedrichshain-Kreuzberg is without a doubt Berlin’s most lively and most colourful district and sleepless nights are the stuff of Berlin’s Music and Club scene. The Berlin Music Week Clubabende (Club Nights) were held from 5 – 8 September. On each night local and international promoters, labels, agencies, organisers and media partners presented artists from a wide range of genres and nationalities. The Berlin Music Week Club Ticket was also a hit with visitors. 1 ticket, 4 evenings and nights, and over 40 locations and clubs – including a public transport ticket! It was an exciting programme for just 30 EUR: Mischpoke Invasion, a joint night with The Great Escape and Haldern Pop, wonderful evenings with the Nordic by Nature Crew, the Kesselhaus with its Paris Connection on Tour in Lido, Turkish label Camp, the ICAS Suite of the CTM Festival and much more. The Club Programme drew a total of 20,000 guests from all over the world. As usual in the capital, events started warming up for the weekend with the Clubcommission Club Night; five curated tours with shuttle buses, 50 participating clubs, and over 100 dance floors. Over two nights 18,000 guests enjoyed the capital’s unique club landscape.

Berlin Festival’s extraordinary eighth edition took place during Berlin Music Week on 7th and 8th September with over 20,000 partying festivalgoers. At the former Tempelhof Airport, surely Europe’s most unique inner-city festival, more than 20,000 guests were in high spirits enjoying top-ranking acts such as The Killers, Sigur Rós, Bonaparte, Friendly Fires, Litle Dragon, Paul Kalkbrenner, Franz Ferdinand, Tocotronic and Kraftklub alongside newcomers like Sizarr, iamamiwhoami, First Aid Kit and Mostly Robot, all providing for a thrilling atmosphere. Once the last headliner had left the stage at Tempelhof, festivalgoers swarmed to the sold out Club Xberg to party with acts like Metronomy, Hercules & Love Affair Soundsystem, Nicolas Jaar, Crookers and Kid Simius playing bass-laden tunes until the wee hours.  One new aspect of this year’s Berlin Festival was the Berlin Music Week Stage. Here the first Berlin Debate was held and other events focused on the next generation of musicians. Festival organisers especially wanted to offer national and international newcomers like ‘Christine And The Queens’ from France, ‘Ghostpoet’ from England, ‘Lay Low’ from Iceland, ‘Highasakite’ from Norway and others a platform here. The organisers sum up: “The idea of an urban festival impressively came to life this year proving that the Berlin Festival with its Art Village and the Berlin Debate does have incredible potential. We are very much looking forward to 2013.” Next year, Berlin Festival will take place on 6th and 7th September 2013.

Sunday concluded festivities with two absolute highlights. In the Admiralspalast at the New Music Award ceremony hosted by ARD’s new youth radio broadcaster, the successors of Bonaparte, Kraftklub and Captain Capa were sought and found. Moderator Hadnet Tesfai announced that Hamburg band Tonbandgerät, entered in the race by N-Joy, were the winners. 2,500 guests cheered wildly, before dancing well into the night with Philipp Poisel and surprise guest Max Herre. The New Music Award was for the first time supported by the Initiative Musik. Meanwhile, at the Osthafen location a premiere was also being celebrated: the Auf den Dächern (On the Rooftops) Festival, hosted by tape.tv and SPIEGEL Online. 1,500 guests along the River Spree were inspired and delighted by Cro, Mia, Ghostpoet, Two Door Cinema Club and others, drifting away on the music into the warm Sunday evening. The artists performed for selected guests on the rooftops and there was also a festival atmosphere at the public viewing event at Osthafen and with the Internet live stream.

Berlin Music Week 2012 was the musical highlight of the year and a thoroughly successful event for everyone involved; partners, visitors and guests. The debate on the music industry’s future was continued and Berlin’s position as capital of the music industry reinforced. We can now look forward to the fourth Berlin Music Week, which will be staged all over the capital from 4 – 8 September 2013.