OFF Festival Katowice 2016: Eccentrics and their Experiments 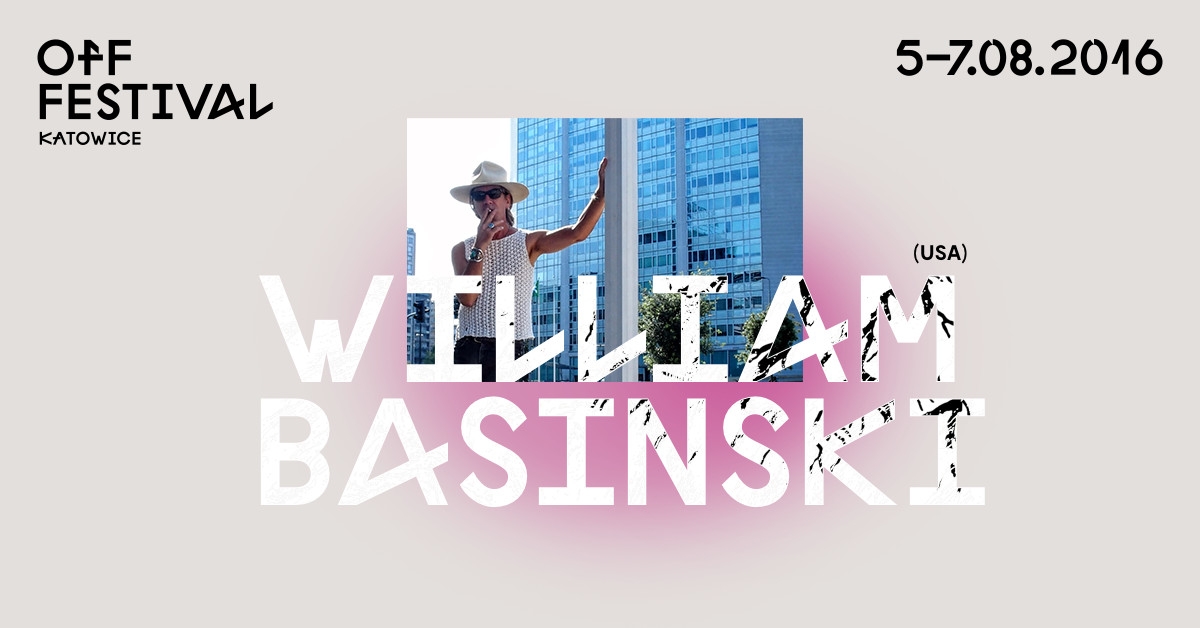 William Basinski
Inspired by Brian Eno’s ambient sounds and minimalists in the vein of Steve Reich, this American avant-garde composer infuses his meditative, ascetic compositions with field recordings and prepared tape. His best known piece is the monumental four-part album The Disintegration Loops, but Basinski will take the stage at the OFF Festival for a premiere performance of a new and exceptional composition: an homage to the late David Bowie, titled A Shadow in Time / For David Robert Jones.

The Master Musicians of Jajouka
Hailing from a small town high up in the mountains of Morocco, The Master Musicians of Jajouka have done more than just preserve a Sufi musical tradition passed on from generation to generation: for over 50 years, they’ve also been its foremost ambassador to the West. The Rolling Stones’ Brian Jones himself produced their 1969 album, just a month before his tragic death in a swimming pool. The list of the band’s high-profile collaborators goes on: Ornette Coleman, Jimmy Page and Robert Plant, Bill Laswell, and Lee Ranaldo, to name a few. Mick Jagger once called them “one of the most musically inspiring groups still left on the planet.” Who are we to argue with Jagger?

Komety perform Partia
Partia is a legendary (i.e. not particularly popular but much beloved) Warsaw rock’n’roll band that takes inspiration from British guitar rock, from The Jam to The Smiths, while somehow managing to capture the spirit of Warsaw as few others can: not just the city as it is today, but also the Warsaw that is long gone and lives on in literature and old movies. After Partia called it quits in 2003, the band’s leader Lesław carried on his mission with a new group known as Komety. Get ready for a retrospective performance at the OFF Festival: Komety will perform a set made up of tracks from Partia’s three major albums: Partia, Dziewczyny kontra chłopcy, and Żoliborz – Mokotów.

Księżyc
A true treasure of the 1990s Polish music scene: psychedelic contemporary music inspired by Eastern European folk songs. After releasing their debut LP to excellent reviews in 1996, the band disappeared for nearly two decades, reemerging in 2015 with the album Rabbit Eclipse, even more avant-garde and disconcerting than the tracks that won Księżyc their legendary status. This is going to be one magical concert.

Adam Gołębiewski
Drummer. Improviser. Visionary. Gołębiewski is no stranger to the uncharted realm between jazz, free improv, and contemporary music, and is constantly in the process of expanding the sonic capabilities of his drum set. His list of past collaborations includes Yoko Ono, Thurston Moore, Mats Gustafsson, Ken Vandermark, and Mikołaj Trzaska.

The Feral Trees
They’re a group of musicians from the Puławy hardcore punk scene, members of the band Hidden World. She’s a Colorado singer-songwriter who plays the banjo and acoustic guitar and is in love with old-time American folk music. Together they formed a group that was rightfully hailed as one of the top discoveries of the Polish music scene last year, thanks to their eponymous debut release, which blends subtle melodies with the power of post metal, as well as their hypnotic live shows.

Lotto
You never know what sound and musical genre this lottery machine is going to spit out. Made up of bassist Mike Majkowski (a leading figure on the improvised music scenes in Sydney, Berlin, and here in Poland, and a collaborator of Mikołaj Trzaska’s), guitarist Łukasz Rychlicki (Kristen), and drummer Paweł Szpura (Cukunft, Hera, Wovoka), this eclectic trio eagerly and effortlessly combines seemingly incompatible elements: free jazz, noise rock, country, and ambient. Their two albums, Ask the Dust and Elite Feline are as hypnotic as they are adventurous. Their live shows are even more so.

JAAA!
Previously associated with Contemporary Noise Quartet, Napszykłat, and Daktari, the musicians in JAAA! have come together to explore their own artistic idiom, departing from electronic music and arriving — if only temporarily — at progressive rock. Last year they self-published an excellent debut record titled Remik. Their engrossing concerts feature jaw-dropping visualizations.

Żółte Kalendarze
Żółte Kalendarze debuted in 2010 with the mini-album Boli mnie serce i dusza, returning just a few months later with the full-length The Best Of. They’re a true phenomenon on the Gorzów Wielkopolski music scene, combining melancholy with humor and pathos with kitsch. The lineup features Magdalena Turłaj (formerly of Kawałek Kulki) and Maurycy Kiebzak-Górski (ex-UL/KR) playing a repertoire of songs influenced by grunge and techno.

Lauda
How do you translate your sweet daily routine into the language of art? Błażej Król (no stranger to OFF Festival audiences) and his wife Iwona have found an answer, translating their everyday home life into soothing ambient compositions. We hope their live show has the same dreamy, sparse atmosphere as their fascinating debut record, Gennin.

Heroiny
Piotr Kurek is one of the most remarkable figures on the Polish alternative music scene, and naturally he’s performed at the OFF Festival before, but never in this incarnation. In Heroiny, which debuted on Dunno Recordings last year with the album Ahh-Ohh, Kurek takes control of the dance floor with a drum machine beat and trippy splotches of guitar sounds complemented with synths. It’s easy to get lost in this.

Jesień
The Toruń-based trio serves up a genre of music whose tradition in Poland goes way back, but is largely abandoned today: Ewa Braun and Starzy Singers no longer exist, while Ścianka has remained meaningfully silent. Jesień, meanwhile, explores the elusive and challenging world of post-punk experimentation, venturing into noise rock and jazz and everything in between. They’ve got three EPs to their name and an excellent and mature full-length debut titled Jeleń, released by Music is the Weapon.

About OFF
A truly unique boutique music festival, OFF Festival takes place in ‘Three Lake Valley’, Katowice – a beautiful green oasis in the heart of industrial Silesia. OFF Festival is a way of life, one that flies in the face of current trends and stays true to itself, and the ethos of organiser Artur Rojek is firmly aimed at supporting art and music with the festival bringing many acts to Poland for the first time. OFF Festival is growing in prominence year on year driven by the festivals forward–thinking, eclectic music policy. From the greatest alternative music stars from around the world to the increasingly strong Polish scene, OFF festival has inspiring music in abundance.